Tomorrow we will be putting our heads together... 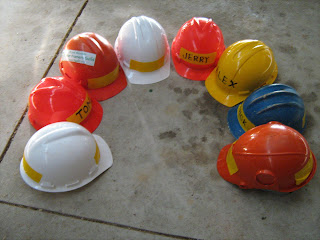 For some serious fun raising truss #1
in these hard hats and putting everything from Milton's book and helping build the Pratt truss bridge with the Timber Framers Guild for the community of Chester, NH last month. We are ready to raise truss #1 one for the South Wayne Community Bridge project. 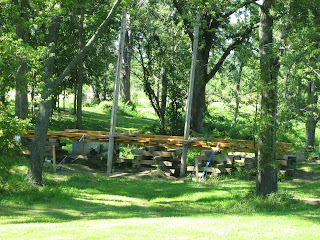 After getting the Gin Poles up and in place we had to do some "tweaking" of them to make sure they were in position. 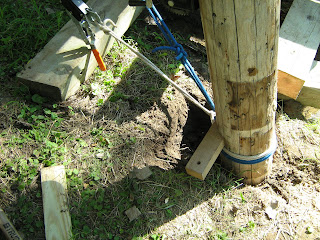 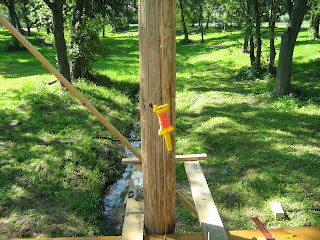 This required some pulling with the come-a-longs pulling them into alignment. 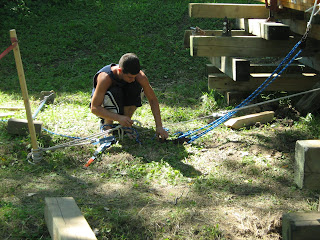 Then Alex and I went to work rigging them for tomorrow. The block, tackle and winch to lift the truss will be aided by two handyman jacks, one at each end of the top chord. The bottom of the Gin Pole is secured from kicking out with a come-along to the bottom chord. Another come-along holds the bottom chord from slipping out during the lift by being tied to an anchor point. Also to this anchor point a block and tackle is attached to the top chord to prevent the raised truss from over turning past vertical. Finally the anchor point is tied back with a stake and ratchet strap. One final detail will be to use the threaded jack posts to support the arch of the camber that is in the bottom chord and keep the bottom chord truss from sagging during the lift.
OK that should do it.
Puzzler - What have we not thought of?
Tech Vocab - Block and Tackle, Come-Along
Posted by Dick at 6:32 PM