Things they never told you in school...

If anyone would have  told me that the hardest part of raising a truss would be getting the Gin Poles stood up I would have listened carefully and asked them what advise they might be able to give me from experience. 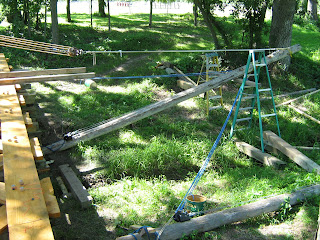 Ok so raising a 500 to 600 pound 25 foot pole to be used to raise the truss is the first order of business. First a 4:1 block and tackle was assembled from a collection of hay rope pulleys I had. Then a set of fence stretcher block and tackle stabilizers was added and anchored. You can see from the picture above that 100 feet of hay rope would not do the job. A 15 foot tag line was added. Good math exercise to determine this length. Remember the blocks will only pull for 25 feet of distance. 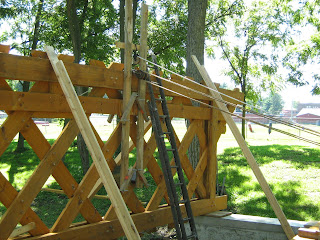 This was solved by tying on some lead ropes. After all calculations were made to make sure that the block and tackle could make the necessary pull distance to stand the pole the process was begun. All went well until the knot reached the top pulley! RATS!!! It was a nogo. Needed a wide style like I had used in making the block and tackle. The raising would have to wait until tomorrow while I hunted down the correct pulley I needed for the job. 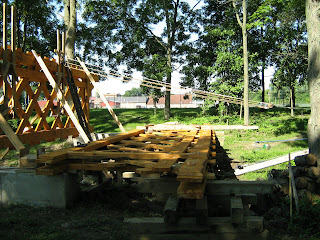 So with the fixed end of the block on the top of the existing truss and anchored to the ground everything was in place. Two men could supply the force to lift the pole. Two men could stabilize the pole during the lift and one man could be the eyes to aim the pole into the lifting yoke. All went as planed and Truss #2 will go up tomorrow. Soon it will start to look like a real bridge. 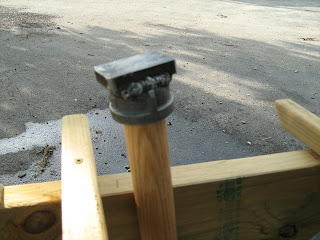 Puzzler - So what are we looking at in the picture above?