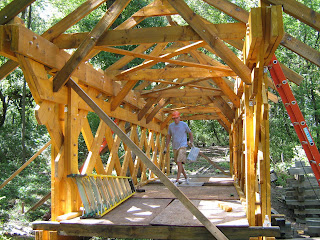 With the help of a few "buds" and some nice weather the second bridge truss was raised. The floor joists and roof trusses put in place and the project now looks more like a bridge. 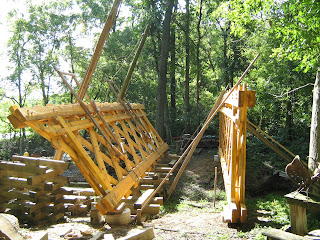 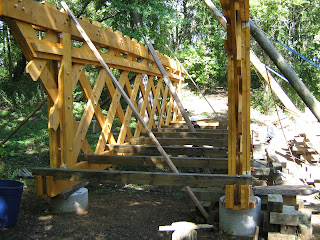 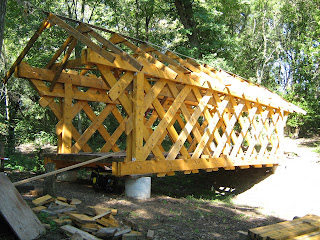 Roof trusses on.      Next up the roof, deck and access ramps.

Bridge building is an unending learning operation and I love it! Here is how I rigged and set the two gin poles for bridge number six. 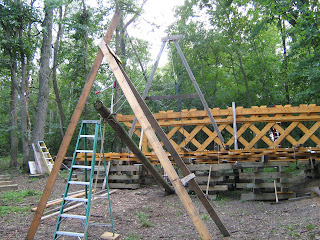 First set up a nice tripod rigged with  a come-a-long that can be used to lift the pole up about 30 degrees. This replaced the 8 to 10 men I saw used used in Chester, NH. 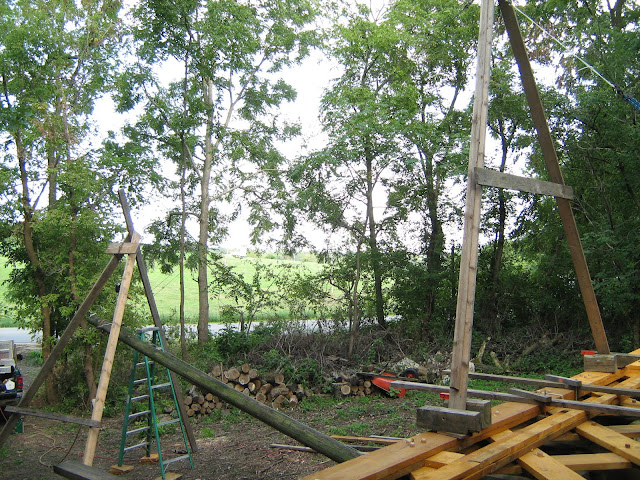 An A-frame, hinged at the bottom with bolts and blocks is clamped to the top chord of the bridge truss and tied back to an anchor with a rope fence stretcher. This replaced the front end loader I tried once at South Wayne and the 4 men on two rope fence stretchers used at south Wayne for the second try. 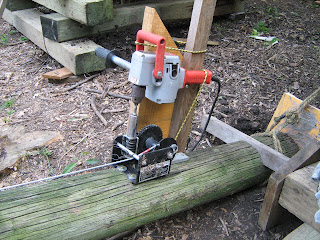 The winch at the bottom of the pole driven by a power drill will do the heavy lifting. You can see in this picture that the drill is mounted to some support planks. The cable from the winch is routed to a snatch block pulley at the top of the pole, then to a second snatch block pulley attached to the top of the A-frame and finally anchored to the top of the gin pole. This all came about because one of my helpers, Jerry asked, why I didn't use the nice powerful winch at the bottom of the gin pole to do the lifting? 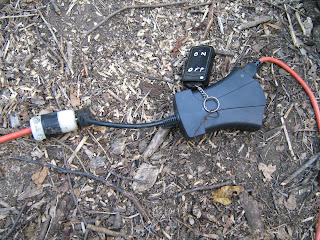 Adding a remote switch to the power line allowed me to do two jobs, first control the drill and second hold the rope tied to the gin top to keep it from swinging left or right during lifting. And I thought that just maybe I could make this a one man operation. Not a good idea, too risky. Better safe than sorry. 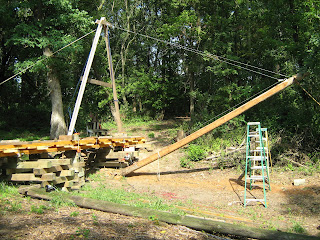 As the pole is raised by the winch it will be come more unstable and the second man will need to help control the pole at the bottom. The winch is used until the two snatch blocks are about 5 to 6 feet apart and then turned off. The winch operator then goes to the rope fence stretcher on the A-frame and gently pulls the A-frame to finish the lift and the gin pole is in place against the top chord where it can be secured and re-rigged to now lift the bridge truss. Double duty for the nice powerful winch, pretty cool!

A new school year starts in a few days. As an educator the experience of learning how to do this by watching it done 4 times in Chester, NH and doing it 4 times in South Wayne, WI lead me to this more efficient and improved method.  Why?

Try something new everyday, you'll be surprise how much you learn. Much needed rain today so I have some down time from the bridge work and thought I would revisit my Duct Tape collection for some fun and share it with you. Have a look at what I believe is the only U.S. / World Duct Tape Collection. Just added Namibia, country #63! 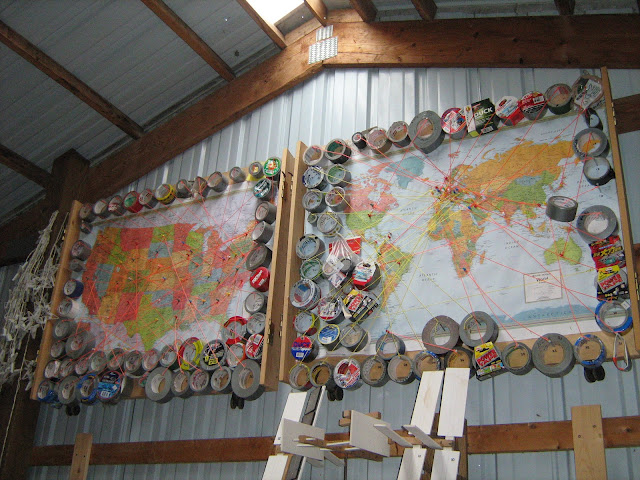 It all started on May 28, 2004 on the way too a World Finals Odyssey of the Mind competition held in Maryland. All OM'ers and the Apollo 13 crew know the value of Duct Tape. Many OM'ers collect OM pins. I thought it would be interesting to collect rolls of Duct Tape. The original idea was to get a roll from each U.S. state at the Maryland competition and have it signed by the OM'er of that state. Great way to meet and learn from other OM teams. Well it took on a life of it's own! Fifty U.S. states, seven continents, 63 world countries so far,  plus the International Space station Duct Tape collecting goes on.

I have kept a log book and each roll has a history and story behind it that is fun to revisit today. Here is just one story...

I showed Werner Britz (the guy who got me roll #23 from South Africa) the roll of Duct Tape I got from Antarctica and he asked. "How did you get a roll from Antarctica?"
His interest an question got me thinking. This is what the Odyssey of the Mind (OM) Duct Tape collection is all about. With that in mind here is the answer to Werner's question.

First I got the roll from Antarctica because Werner got me a roll from Africa! It was his roll from the sixth continent that spurred me on to achieve the goal of getting one from Antarctica and then have a roll from all seven. It was at church that Werner gave me his South African roll and Charlie Sleep asked about the OM Duct Tape collection. I am sure I gave more information than he wanted. The discussion turned to details of how duct tape is not manufactured in every U.S. state or every country of the world and "positively not" in Antarctica, according to Charlie. The discussion about what "we know" about Antarctica got me thinking. I made the statement that "what if" there was a town or city in Antarctica just like on other continents. After all it is a big place. My thinking was pretty much dismissed by Charlie. That night I pressed on and began a search that would become an odyssey of discovery for me that was the size of Antarctica. I would stumble upon the names of people and places of stunning coincidence with Darlington, Wisconsin. I would visit with people that share a like mindedness of learning, discovery and problem solving. All this came together and was held together by a simple roll of duct tap and my OM Duct Tape collection.

As I pulled my World Book encyclopedia from the shelf and began reading about Antarctica new information poured into my brain. The facts, the figures, the physical features, the natural resources, the explorations. The stories, the pictures and maps. Five pages in all. Would there be a reference to Rolf Kool and his appliance store, the first on the continent to sell freezers? No, but as I studied the maps looking for a town or city where someone might live that I could contact and get a roll of duct tape from I was treated to a knowledge feast! The likes of which spiraled into and thoughout my brain like when someone on a school bus peals an orange. I was dumb-founded by my discovery. So that you too may partake in the experience I suggest that you read and study as many maps of Antarctica as you can. If you do, you will see what I saw.

I was on a natural high. I poured over the stories about expeditions and then went to the internet. As I read more, I learned more. Like a fish on the run with the bait, I went from web site to web site. I was hooked and hooked good!

I learned that no single country owns Antarctica. There is a lot going on there and it goes on all year around. I learned that the U.S. interest in what goes on there falls under the National Science Foundation (NSF) tent. The NSF has contracted with a company called Raytheon Polar Services headquartered in Centennial, CO. They handle things in Antarctica like the company the US government hired to support the US troops in the Iraq War.  I learned that they publish a newspaper, the Antarctic Sun and Valeria Carroll is the editor of it. From reading some back issues I learned the details of what is going on and was convinced that getting a roll of duct tape that had been on the seventh continent was achievable. I contacted Valeria and gave her the details on the OM Duct Tape collection. She informed me that the continent was "closed for the winter" and the next flight would not be until August 1st when spring starts down there. However, she said she would check around and see if any of the crews that had just returned from a tour of duty had brought any tape back with them. Valeria checked and was successful! She didn't get just any roll. She got a roll from the South Pole Traverse Team! This roll wasn't signed by just anyone it was signed by John Wright, the leader of the Traverse team. If you want to read the whole story go to the Jan, 1, 2006 edition of the Antarctic Sun. In a nut shell. The South Pole Traverse was a four year NSF project to make an overland route between McMurdo Station on the coast and the South Pole. Wright and his seven man team safely avoided innumerable crevasses and plowed though soft snow to accomplish a feat not seen since Sir Edmund Hilary crossed the continent to the Pole in 1958. "This historic achievement sets the stage for fuller realization of the scientific potential of the new South Pole Station," said NSF Office of Polar Program Director Karl Erb. "Reaching the South Pole safely and returning to McMurdo over the same track, represents an outstanding accomplishment," Bresnahan said. "Delivering cargo to the Pole in this initial traverse is beyond the goals of the Proof of Concept Traverse." The route is over 1,000 miles and took the team 43 days to go just one way!

Valeria Carroll got the roll signed and mailed it to me Fed Ex on April 11, 2006. And that is how I got a roll of Duct Tape from Antarctica.
Posted by Dick at 8:50 AM No comments: 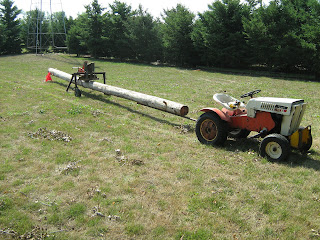 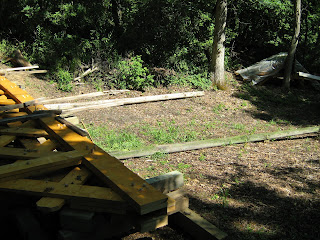 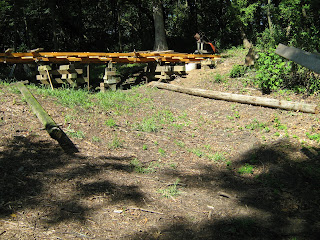 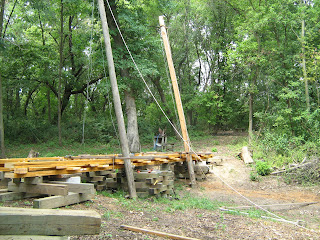