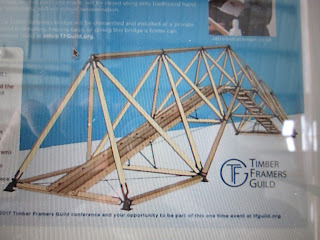 was assembled by a hardy crew of Timber Framer Guild members at the 2017 TFG Conference in Madison, Wisconsin this past weekend May 20-22.

The back story. Richard Latrobe-Bateman is a bridge designer from England that uses the least number of pieces, forming triangles and thinks three dimensionally. At the 2016 TFG conference he suggested that one of his bridges could be built at the 2017 conference in Madison, Wisconsin and auctioned off as a fund raiser for the guild. Jonathan Orpin, president of the guild at that time and owner of New Energy Works and Pioneer Mill Works said, good idea and got it done! 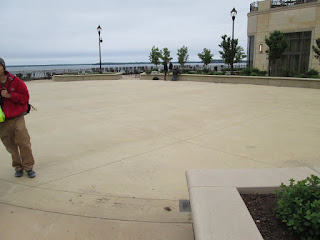 The site at the Edgewater Hotel was a challenge to say the least for a 90 foot long bridge. 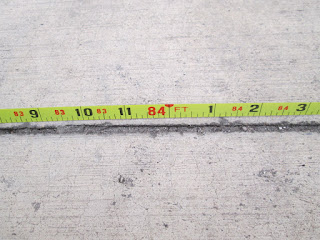 Not only were we going to build this 90 foot long bridge in one day, we were going to do it in 84 ft! 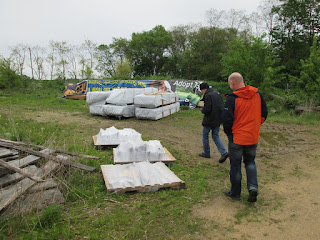 Richard Latrobe-Bateman and his son Will look over the bundles of timber and pallets of connectors shipped to Mike Yaker's shop in DeForest, Wi. because there was no place at the construction site.

Not to sweat the small stuff the project went forward. About two months ago George Brinkman of Boards by George a guild member in Meddow, BC cut and donated the timber for the project. Over 2700 board feet of old growth Spruce was shipped to Fraserwood Industries in Creek, BC where Peter Dickson's team did all the cutting and drilling on their Hundiger to produce finished pieces. And I mean finished pieces they even stained the wood! While Mike Stewart was making the pieces at Fraserwood another fabricator was cutting, bending and welding the over 90 very complicated steel connectors that would be needed to put this erector set together. Mike assembled all the hardware and even made a test assembly run of the first pyramid to insure the projects success! 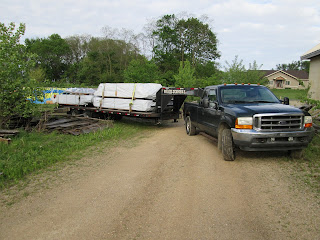 With more donated labor and equipment Mike Yaker of Wood Joiners, in DeForest, WI packed up his trailer ready for the 25 mile trip into downtown Madison and the Edgewater Hotel where it would be unloaded and... 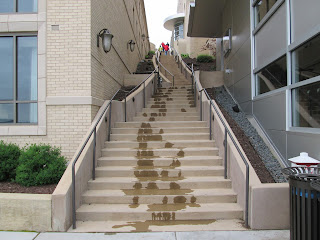 hand carried down to the building site. 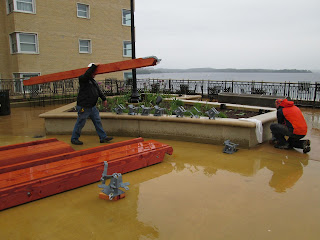 With each 6x6 timber weighing between 100 and 175 pounds this was a job going down but will be a killer on Monday for take down and removal. 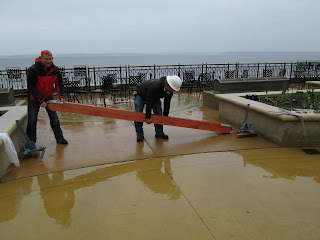 We got the space laid out and some scaffolding set up and then the rain started. Here the Lead person  on the job,  Darrin Watson from New Energy Works sets the first timber in place at around 10am Sat. 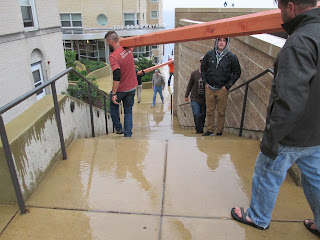 Got a little brake in the rain and a good crew of helpers came out between conference sessions and toted the timbers down for us. (They really saved us as the rain kept up all day) They even came back on Monday and did the job to carry everything back up and be loaded for shipment to the new owners. 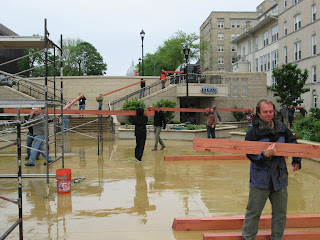 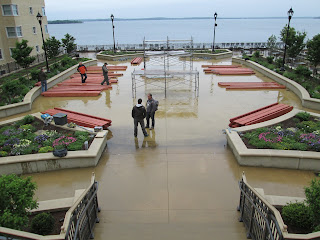 With all the timbers hauled down and scaffold set we were ready to start assembly. 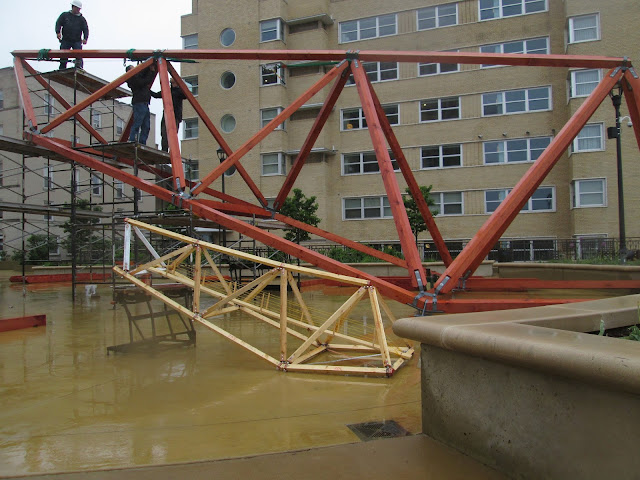 Things went as planned with the stages of scaffolding supporting each lower timber and then building the pyramids on top of them. Then install the ridge beams. The 1/5 scale model was a big help especially in the rain. Each timber was numbered and we could match them to the numbers on the model. Nice and easy to read in the rain! Our crew was small but we were determined and after lunch would start on the other half. We now knew the system and could even become advisers when helpers ventured out of the nice warm, dry hotel conference! 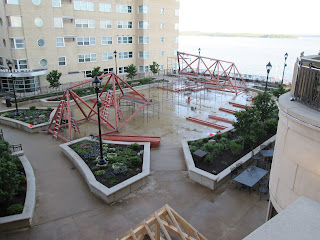 It was getting close to supper time and our small wet crew was starting to show some wear and we thought the better of it would be to stop and go at it fresh Sunday morning. The weather would be with us and some more guys would want to get in on this. No sense keeping all the fun to ourselves. Right? 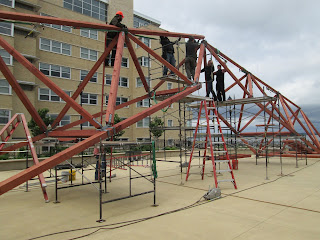 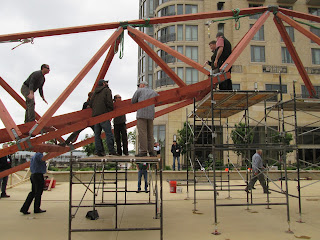 Sunday, a new day, a change in the weather and many hands made light work to finish the bridge by noon. One of those hands was Ben Brungraber and Joe Miller, from Fire Tower Engineering at the top of the scaffold putting in the last piece. They did all the engineering calculations on the bridge structural design for loading. Now to take away the scaffolding and enjoy looking at and walking across the 90 foot Latrobe-Bateman Bridge. 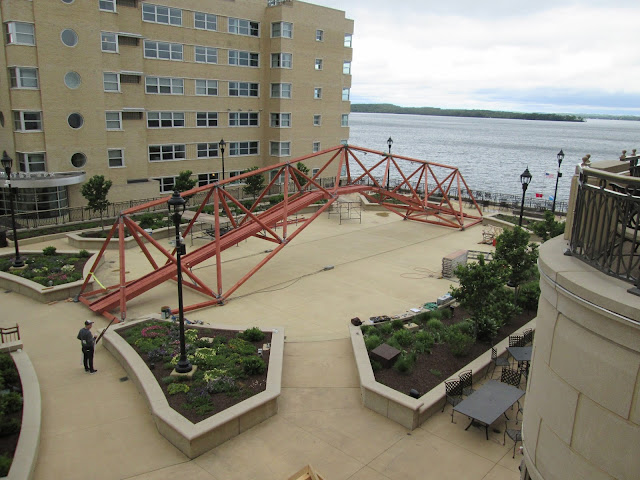 With the scaffold removed and the walkways in place. Pretty as a picture! 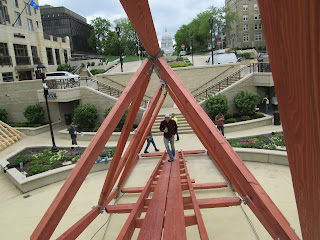 Inside barrel view looking back toward the city of Madison, Wisconsin. In the top of the picture you can see the state capitol. And a proud day for the designer, Richard Latrobe-Bateman standing on a bridge of his design. Great guy. This was a project that required the help and input of many people in and out of the Timber Framers Guild and a true testament of what can be accomplished by teamwork and innovation. Like they say, Leap and the net will appear!

The bridge took around 12 hours to assemble and 4 hours to take down. It was purchased by the Arete' Engineering group from Boone, NC. It will be shipped to them for arrival by June 1st. No site for placement has been selected yet. I will follow up with them and post that information when I get it. Until then remember, "Crossing a bridge in your future will be a bit easier after you have built one or two." RCA 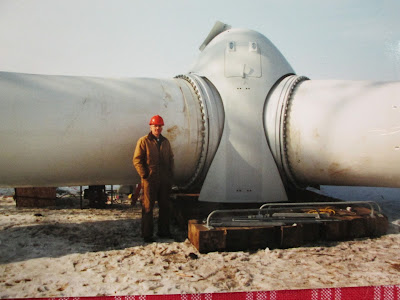 Decided to go with the "Big" blades now that the generator has been rebuilt! 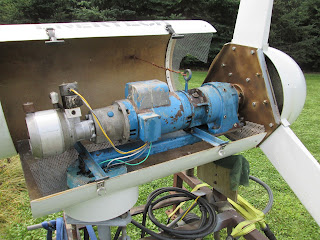 I just hope the brake on my Enertech 1800 can handle the bigger blades! Just kidding. The "Big" blades are for a 1 Meg watt generator in Monfort, WI that was built about 10 years ago. Anyway getting the generator and brake back up on the tower and bolted on was just about all I could handle. 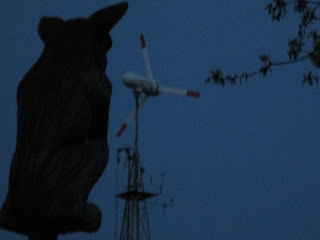 It took almost six months to get the unit back up and running. If you want to see all the details you can go back in the blog posts and see the whole story of the Enertcch 1800 rebuild. Now I will have some time to watch the construction of the 49 two megawatt wind generators that they are putting up this summer right here in Darlington, WI.
Posted by Dick at 8:20 AM No comments: