Came across a news article in the local paper that announced the moving of an 1830's log cabin in Scales Mound, IL to the Apple River Fort in Elizabeth, IL this past week. Sounded interesting so I went to check it out.

The history goes like this... This part of Wisconsin, Illinois and Iowa is rich with Indian history.  Chief Black Hawk in 1830's took a stand against the U.S. government's ruling that they be moved out of the area to land west of the Mississippi. The settlers moved in and built several forts in the area. One of them being in Elizabeth, IL near the Apple River. On June 24, 1832 a large war party lead by Chief Black Hawk attacked the fort in Elizabeth but were repelled by the 40 to 50 settlers in the fort. In 1995 the community formed the Apple River Fort Foundation and rebuilt the fort as shown below on the site of the original. The 50' by 70' stockade has 2 other log cabins inside and this two story fort on one corner. Very impressive and a great field trip back in time to the way it was in this area in the 1830's. 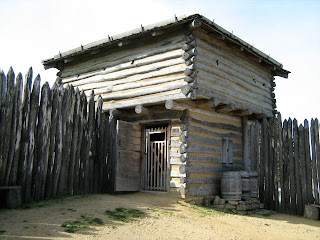 The 16' by 18' cabin being moved has gone through many changes over the years with a second story added plus a back addition and everything was covered with siding. If you study the pictures below you can get some idea of what this group is in for as they go about the considerable task of restoring this miners cabin. "We are proud to grow and enhance our ability to tell the story of the Apple River Fort and the Black Hawk War," said Skip Schwerdtfeger, Apple River Fort Foundation Persident. "We are very conscious of our responsibility to tell the whole story, both of Black Hawk's people and the settler's defending themselves in the fort. The cabin will help us tell the story better." 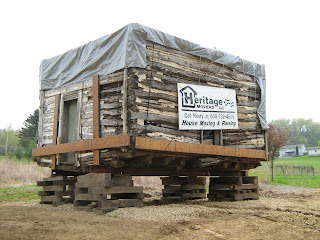 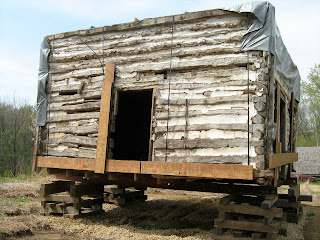 In the picture above you can see the difference in the top four logs making the second story. They were left round with the bark on them and not hewed flat on two sides like the bottom logs. It is also interesting to note that there are only doors in this cabin, no windows! 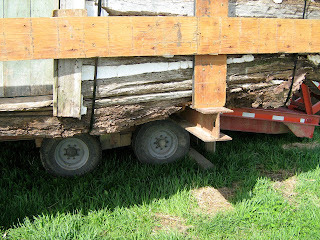 A close up of the cabin on the moving trailer shows that the bottom logs have rotted away. In my mind this project will require considerable time and effort to restore. I am puzzled as to why they decided to move the cabin as a whole and not dismantel it. Then they unloaded the cabin right on the site with little or no foundation preparation. Go figure? With great interest I will watch the process as it unfolds and post their progress as it goes over the summer. They plan to have it done by this fall.

Any thoughts out there as to their methods?