Roof and Loft - That's a lot of wood!

The first order of business was to surface all the rough sawn boards that would make up the floor of the loft so they were the same thickness. 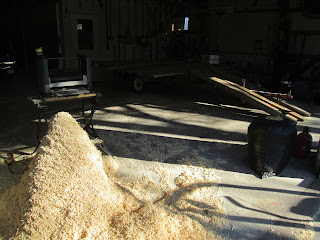 This was one of the two piles of shavings that came off the loft boards (imagine doing this with a Jack plane by hand). Note: When mixed with a little fuel oil this stuff make a great fire starter for wood fires. 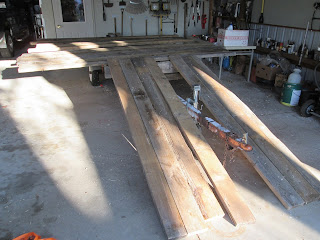 This was a process to say the least. As the boards were various thickness from two inches + down to 1 - 1/2" the boards had to be sorted out from thickest to thinnest and ran through the surfacer in order of thickness to avoid constant height re-adjustment. After a couple of hours the job was done. With all the loft floor boards at just a bit over 1 - 3/4" in thickness. 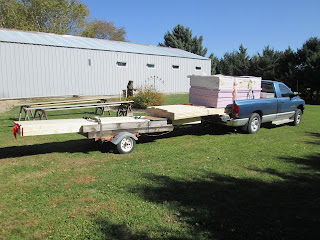 The next steps in the process required a bit of multi-tasking. I decided that it would be easiest to stain and finish all the roof and loft boards before they were put up. It is a lot easier to do this when they are down on the ground and not overhead. So it was off to Menards to get the 16' long 2 by 8's and 2" styrofoam insulation. Here again a bit of engineering was required to get everything loaded for the 25 mile trip to Darlington. One thing that made the trip possible was the sheet of OSB plywood that I placed in the area  between where the two piles of 2 by 8 overlapped so that when the truck turned the upper pile did not catch on the lower pile on the boat trailer. Looks a bit like some of the load pictures you see on You Tube. 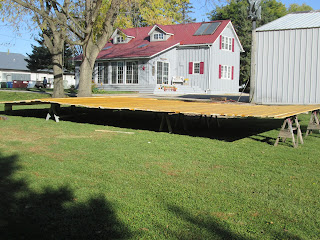 That's a lot of roof! Had to improvise a bit to build racks the would hold all 63 of the roof boards so they could be stained and finished. First the boards were stained using a roller and then two days later coated with a clear coat of gloss polyurethane. 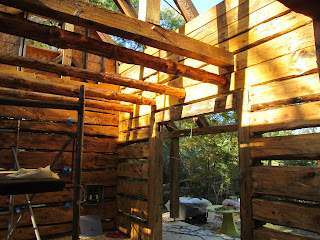 While I was at it I thought it would be best to stain out the cabin logs as well. The week before I had bleached the logs to brighten them up and then wire brushed them to remove any loose material and smooth them out. Then using my Wagner airless sprayer went to town on the inside and outside of the cabin logs as well as the roof beams and supports. The Honey Gold stain really brought out the grain and color of the pine logs. Later I will also give the inside a coat of the gloss polyurethane to shine them up. When the sun is on it make it look like a picture out of the log cabin magazines. 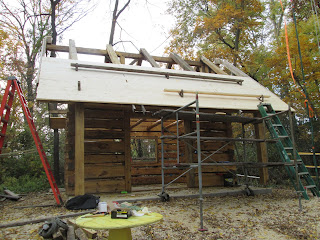 With all the boards and cabin walls stained it was time to set some scaffolding and begin putting on the roof boards. This has gone pretty well so far. The 2" styrofoam will go on next and then the steel roof. 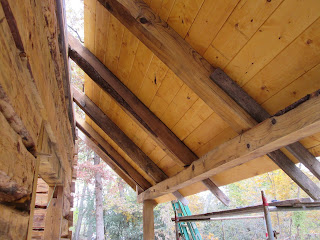 Here is a shot of what the roof is going to look like when finished. You may notice some dark 2x4's in the picture along side of the roof rafters. These were required to support the roof boards on the edges until the proper 6 be 6 beam extension pieces could be cut and attached to do the job.
So things continue to progress and soon the cabin roof will be on and any rain kept out so the inside work can begin, loft floor, loft stairs, gable end insulation, wiring, window and door frames...

So now with the Rake end boards set in place it was time to frame in the Gable ends. I practiced on the solid end and then went on to frame in the window and air conditioner openings. 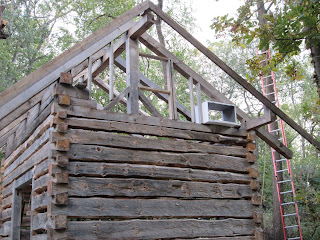 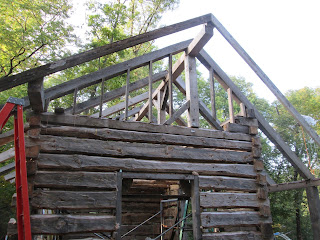 Next on with the 1/2" sheathing. This will seal off the wall and provide a nailing surface for the rough cedar boards that will be run vertically. 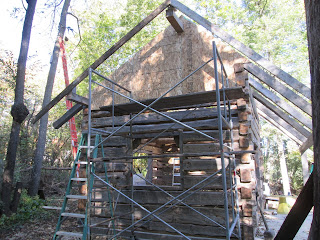 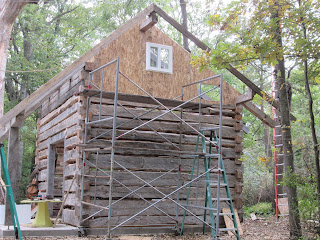 The exposed wood discolors a bit as you can see in the first picture. To brighten it up some a 50/50 mix of bleach and water is sprayed on the surfaces and just like that the wood looks fresh and the grain stands out more. Now with a coat of finish it will stay this way if protected from the elements. More on that later after the roof is on. 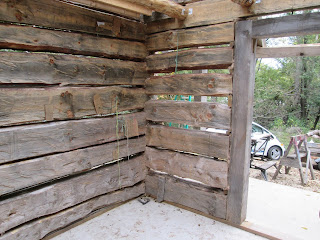 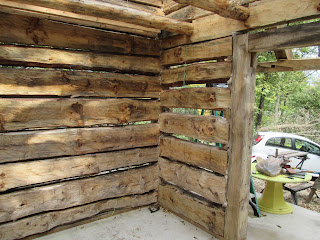 So another step along the journey of building Cabin #6 taken. If the weather cooperates I will stain out the cabin and maybe even cut in some outlet and switch box openings next. Or maybe work on surfacing the loft floor boards. Plenty of things to work on. 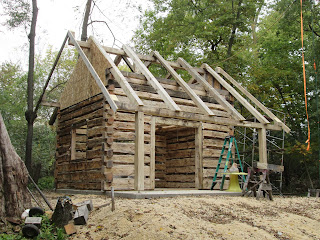