It was going to be so easy. Determined the exact location in the van floor and now just use the hole saw to make a 4 inch hole for the drain tube in the battery box. What could could go wrong? 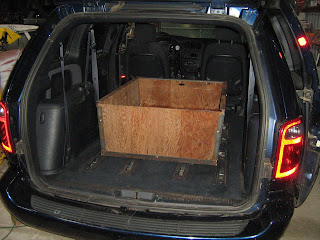 Like the saying goes, "At the end of a perfect day, look out the days not over yet." Ugh! What was I thinking?  Lucky I stopped to clear out the carpet plug.  Could only think how much worse it could have been. 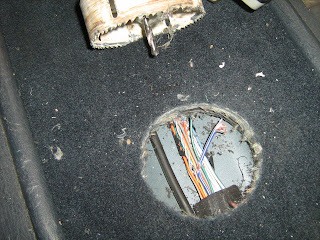 Two hours later and several inches of jumper wire and shrink tubing and all is well again. Now I know how the power gets back to the back of the van. 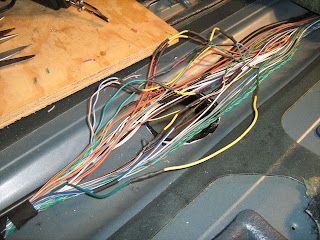 Considering that in this conversion all 16 batteries will be in one pack I needed to design a layout and test it to see if my old cables would work. Happily no problems. Can still use the fuse links and only need to add one short jumper cable. Gees, hooking up cables like this makes me nervous. One wrong connection and ZAP! 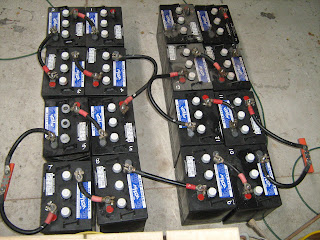 Nice sunny day today so I decided to roll the van outside and wash off two years of dirt and grime that had settled on it during storage sitting in the shed. Looking good. Now on to some more wiring and component mounting. 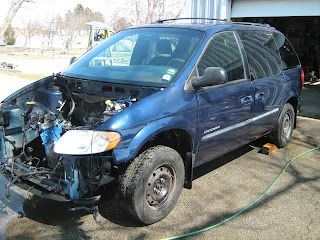 Have successfully hooked up the shift linkage and mounted the Omni sift lever on the floor in the Caravan even was able to mount a clutch peddle and get it working! 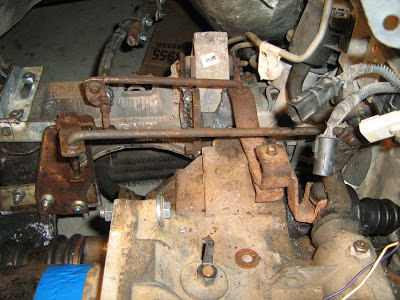 A bit of an extension needed to be fashioned and attached to the lengthen the linkage to the shift knob and can be seen at the top of the photo.


Then I got distracted by the pine logs I had collected this summer and started thinking about another log cabin only this time I would try my hand at hewing the logs by hand too. Call me crazy (I even thought that this might not be to smart but then I tried it) but I think this is dooable! After all they did it 100 years ago without a second thought, right? 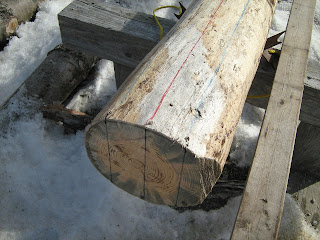 First step peal the log and then layout guide lines on the log end to determine the cut depth. Each log will be flattened to 6 inches in thickness. 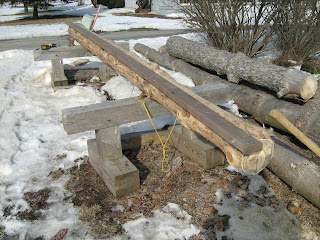 I used a nice straight 2x4 as a guide to draw lines the length of the log ( I tried a chalk line but had no success with it, laser too). 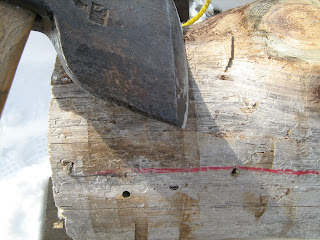 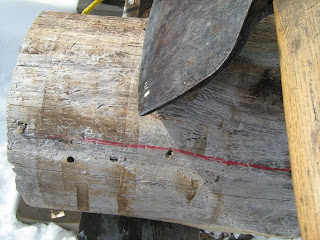 My tool of choice will be an 8 inch broad axe. I "researched" the process of hewing a log on the internet and watched several U tube clips on the process. Each attacked the log by chopping down, parallel to the surface that was to be flattened. This required straddling the log or standing along side and swinging the axe in such a way that put one's legs and knee caps in harms way! As you can see in the two pictures above the broad axe is sharpened with a bevel on only one side. Why (this would be important)? 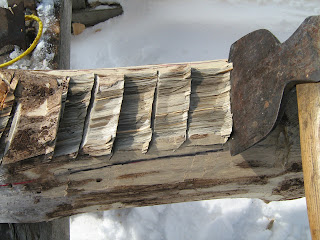 After 2 hours doing one side of one log the way I "saw it on the internet" I thought no way! Even though I got better at it doing the second side I still felt that the process of hewing logs for cabins must have been one of the reasons early pioneers had strong arms but died young. I discussed this process with a cabin building friend and he asked if I was chopping perpendicular to the log like he did? See picture above. I had seen him do this on some of the replacement logs we had made for his cabin a year ago and rejected the technique out of hand because "I saw it on the internet" and no one did it that way. After talking with him I went home and thought I had nothing to loose and gave it a try. I thought about it and to me it seemed logical to chop with the bevel up so I did. The results were very poor and I again rejected this approach because "I saw it on the internet" and convinced myself of it. When I shared my attempt and poor performance using his method, Tom said, he would stop by and give it a try.  When he arrived he took the axe and began to chop away. The chips exploded off the log and he made more progress in 5 minutes than I did in half an hour! I was dumb founded he was chopping with the BEVEL DOWN. Each chop split a good 1 inch deep piece of wood off the log. On the return pass the chips that remained were cleaned off and the surface smoothed down. 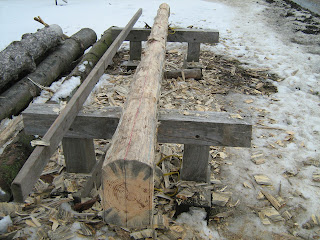 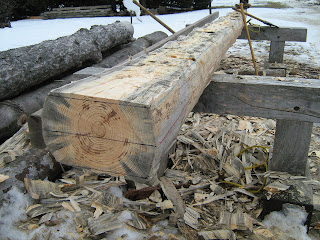 One 16 foot log in an about an hour, not bad. I think this is dooable!  Bevel side down and I have not seen that on the internet. Now back to work on the EV battery box.