This marks the milestone of 100 posts to this blog and the completion of four projects.  A 32' Town Lattice covered bridge, help building a 25' Pratt Truss covered bridge in NH, the repair and return to life of a 150 year old log cabin and a nice recycled barn Log Cabin Kit. 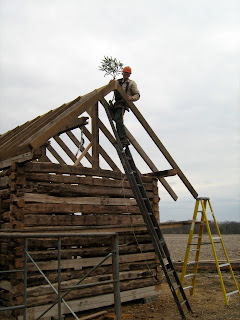 Retirement can be a lot of work! 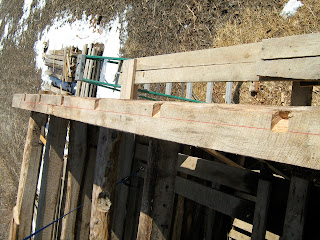 Had some serious fun with this project. Trying and learning right up to the top with the cutting of rafter pockets in the top plate. 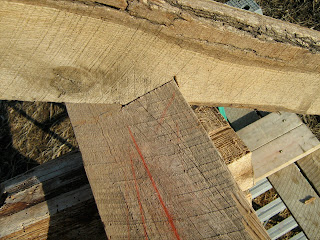 This made the work of setting the roof rafters a dream plus very secure. 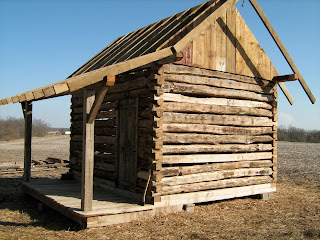 I'll make and hang the doors, then board up the gable ends to keep busy while I look for someone that wants a nice DIY Cabin Kit project. This is a good starter cabin kit for someone that wants to get involved in doing what most people only dream about. After it is reassembled, some windows are cut in and roofed imagine sitting by the wood stove drinking a nice cup of hot coffee as the snow piles up outside.
Posted by Dick at 7:28 PM 2 comments: 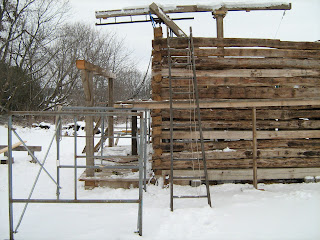 The cabin front porch beam is up and in place. Interesting project and some new learning in the process of cutting and housing the braces then draw boring the mortice and tenon joint.

Through the years I have found that there are always at least two ways of doing things. In the classroom, as the "teacher" I (but not many of my students) considered this a strength of sorts. However, it never failed during a demonstration of some process that an "experienced student" would challenge the method I had selected saying, "That's not the way we do it at home." My response would be, "Well, try this way, and then you will have two ways of doing the same thing. See how it goes, then you can choose the way you want to do it." Need the patience of Job at times! 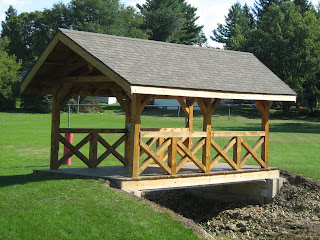 I wanted to use mortise and tenon joinery with wooden pegs. "I was lost and did not know it." I even pegged the ends of the braces! Oh my. Then, on my own, for braces, I decided to center the tenon and achieve one of the goals of housing by cutting the tenon back 3/4" from the front surface of the brace. I had read a bit about housed joints but dismissed the idea as to complex. My "solution" to my problem did the job! I had seen posts with braces in place but had never seen one disassembled like in the picture below. I just didn't get it. Imagine that! Now I do. 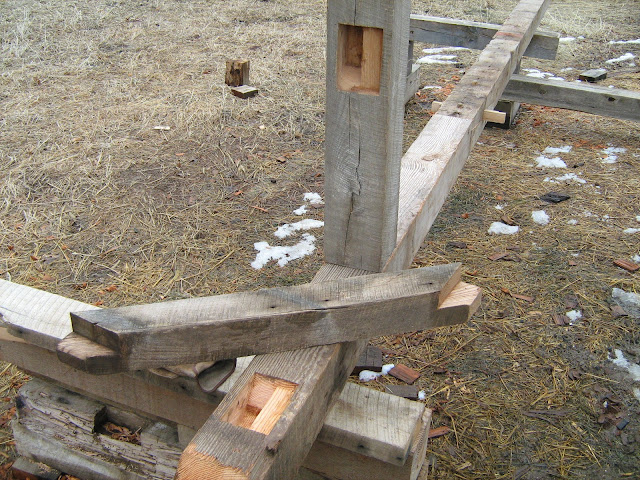 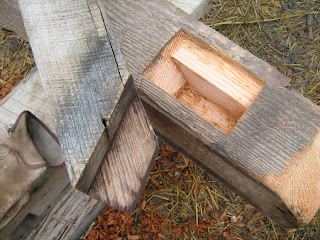 It's all about the details. Something about actually doing one or two of these that gets the housing idea to literally and figuratively "sink in"! On a 45 degree brace like this the diagonal length can be calculated by simply multiplying one of the triangle legs by 1.4142 or you can go through the whole Pythagorean Theorem thing if you want to make one of your old math teachers happy. Just make sure to add the two depths that you plan to house your brace to the legs of the triangle! If you do this right you will get a joint the looks very clean with no way to see into the joint at the edges because they are housed by the surrounding wood of the post and beam. 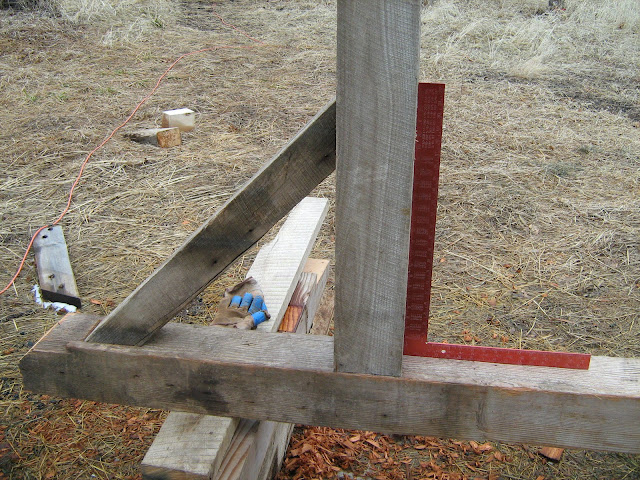 See, neat and clean. Also no pegs required because when the post and beam are pinned the brace is mechanically locked in place. 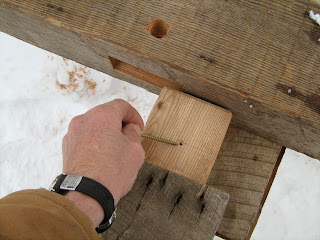 I wanted the tightest fit possible between the post and the beam. To do this I would draw bore the hole for the pin. First the hole was drilled through the beam. I then inserted the post tenon into the mortise and used the drill bit screw point to mark the center location on the tenon. Then I moved that center point 1/16" closed to the shoulder on the post. Note: here you have a 50/50 chance of going the wrong way with this so it is a good idea the think about it a bit before you drill the tenon. The idea is to make the holes not line up and when the pin is driven in it pulls the post up (in) and tight to the beam. 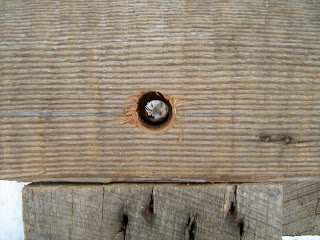 Looking at the assembly picture above and the draw bore hole. Beam is on top. Post is on the bottom. See how a pin, when driven in would "draw up" the post to the beam? Neat idea.
Posted by Dick at 2:58 PM No comments:

Making a joint like this takes time.  During the process, that time, gives you the opportunity to just lean back and let it all soak in. Like eating a pancake covered in Maple syrup you made yourself. Doesn't get any better than this. 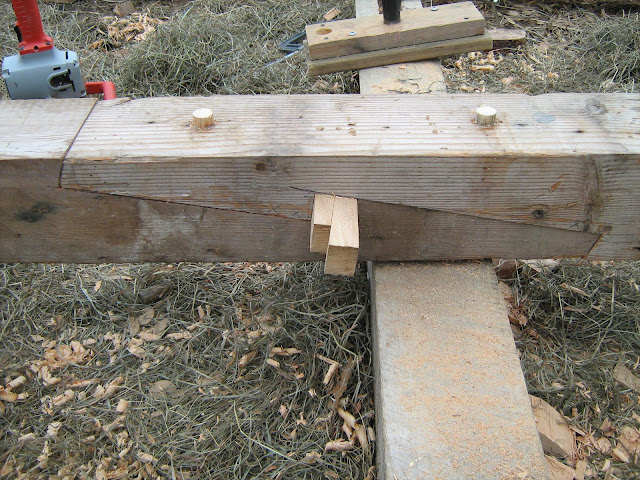 I must admit that at first glance this joint looked extremely complicated to me. I am sure that anyone that has ever made one of these will agree they are not!  The design and layout is very basic and straight forward. Maybe that is why authors that write about these just seem to skip over the "basic" details of layout that would be most helpful to beginners like me. 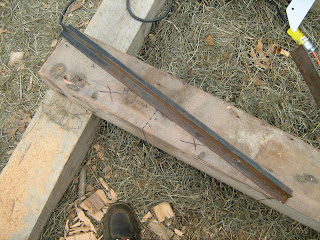 The key for me was to realize that I could simply use a 1.5" or 2" parallel strip to layout the tables and wedge location on each piece. Study the pictures above and below. See if you can visualize the lines that need to be drawn along the parallel strip. 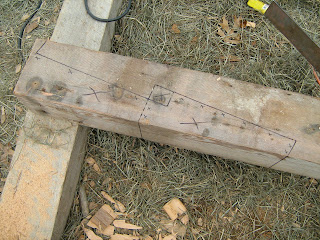 The "X"s mark the waste wood to be removed from the piece. I choose to squint my ends a few more degrees but using just the 90 degree end of the parallel would have done the job. Having a parallel that was 24 inches long one could locate the center and mark back 1/2 the width of the wedge opening too.
I'll bet that years ago every timber framer had one of these parallel layout sticks in their tool box. 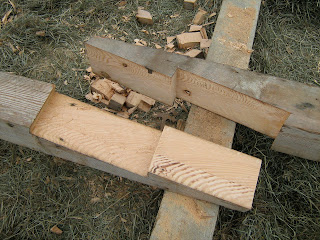 After some work with the saws, chisel and jack plane here we are. Ready for the wedge and test fit. 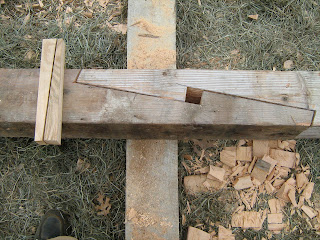 Here again what must seem obvious to the more experienced framer was an awakening to me! In my brain I was thinking how I would get just the right taper cut into the oak wedge I had planned on making. Then it dawned on me that cutting my single piece into two pieces would solve any and all wedge  problems! Perfect fit up. So basic. So straight forward. 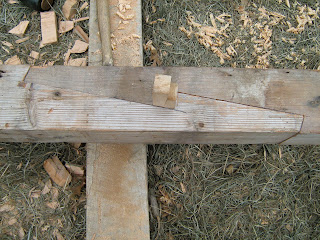 With the wedges driven in, the joint is clamped and the kerf sawn up to make the squints full contact and a nice fit tight. If you want to have some serious fun try laying out one of these joints on paper. Cut them out and check your fit. Pretty cool!
Posted by Dick at 6:06 AM 1 comment: