A year ago at this time had anyone asked me about KW (Kid Wind) I would have responded that kilowatts are the units that electrical power is measured in. Then if they would have said no, no I mean the Kid Wind Challenge, I would have guessed that it had something to do with teams of kids building something powered by the wind.

Then EDP Renewables, the company building the Quilt Block wind farm in Darlington, WI sent me to one of Mike Arquin's RE Charge Labs held in Boulder, Colorado for a week of I will call total KW immersion. Five days, forty hours of hands on fun filled learning experiences and experiments using all the materials for KW but also much more. Like solar, hydro, utility grid, vehicle, etc. fun learning activities for K thru 12 classrooms. Plus field trips to Vestas and the NREL to see the real thing.

I was hooked and began a journey that would involve, two local school districts, Darlington and Shullsburg. Four teachers and 20 students forming four KW Challenge teams. With EDP support and Mike Arqiun's help the teams began to design, build and test different blades and gear ratios in the wind tunnels and study their performance. Then redesign, modify and test again. Doing research and applying what they learned to continue to improve and expand their knowledge about wind energy and the design of wind turbines. Along the way I ran a workshop in Madison, WI and a sectional presentation at the WTEA (Wisconsin Technical Education Association) 2018 conference for other teachers to spread the word about KW and KW Challenges.

The four new KW teams competed in a KW Challenge held at the Wisconsin Energy Institute in Madison, WI and based on their knowledge and performance three of the teams qualified to compete in the 2018 National KW Challenge on May 8-10 in Chicago, IL during the AWEA (American Wind Energy Associations Conference). This was a very big deal! As first year teams we had no idea but went to work re-designing and re-building the blades and turbines as we knew our teams would be compeating against teams with more experience from all over the United States.

The logistics of getting three KW teams, coaches and equipment to the McCormick Place in Chicago would be costly and complex. Transportation, lodging, food, some time for fun and the competition. Again EDP Renewables was there supporting the teams and all the work they had done. This really meant a lot to everyone involved to see how EDP Renewables valued what the teams and coaches did. 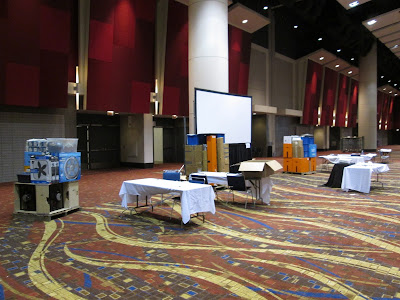 The teams and coaches were prepared and ready. They were on their own. I was invited to be a part of the staff to help set-up and judge at the 2018 National Challenge. I was going to go from having no idea of what KW was to the National Challenge in less than one year! We started setting up Monday before the challenge on Wednesday. Everything was packed on three pallets. 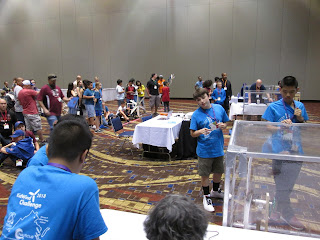 Four wind tunnels were assembled and tested before the teams started arriving for practice runs. The tunnels ran from a high of 6 m/s to a low of 2 m/s and each team had to run their turbine in all four tunnels for a combined performance rated in joules produced. 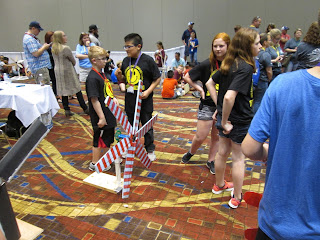 One of Darlington's teams waiting to test their turbine. 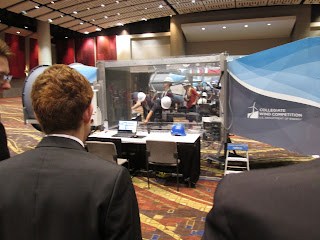 Another cool thing about KW National Challenge is that at the same time, in the same ballroom the college level wind challenge, sponsored by the AWEA and ran by the Department of Energy is gong on. The middle school and high school Kid Wind'ers get to see the BIG wind tunnels and college teams test their turbines in wind speeds up to 20 m/s. Then if you go across the hall you have over 400 manufacturers of equipment used in the wind energy business. It is set up so the students can see and experience the people and steps one can take on a career path to some job related to wind energy. 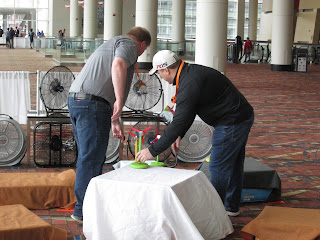 A KW Challenge is a lot more than just building a wind turbine and producing some power. There is the Knowledge Test and Team Presentation. The Bonus points and the Instant Challenges. One of my jobs was to judge one of the high school Instant Challenges. The teams had 30 minutes to design and set up a wind farm in the area pictured above. The goal was to design a wind farm that produced the highest power measured in millawatts for the lowest total cost of building it. We had several fans at different heights running at different speeds. Then we placed different sized boxes to simulate the terrain. Teams could use two different sized turbines. Large ones cost $150 and small one cost $100 and the 24" long wires to connect the turbines to the Substation some 10' away cost $15 each. I got a couple of parents from a Darlington team to make a test run to see how it worked before the students tried it. Teams could set up a wind farm, test it and get the 30 second average mw reading. Then they could go back, redesign and test again as many times as they wanted in 30 minutes. The best wind farm value = mw/total cost was the one used for scoring. 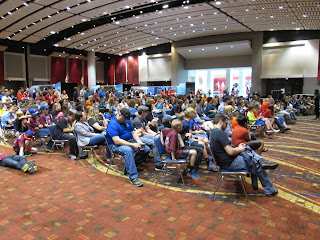 So after 2 days of testing, re-testing and instant challenges the 17 high school team and 40 middle school teams from 12 states qualifying for the 2018 KW National Challenge were ready for the results. Considering that this group represents the 57 most knowledgable and skilled KW teams at designing, building and testing wind turbines in the nation where a team places among them is just motivation. If your team places high you will be motivated to up your game next year so as to stay on top. If your team placed low that will motivate you to learn from the experience of other teams you saw and learn more to move your team up the ranks next year. Motivation. 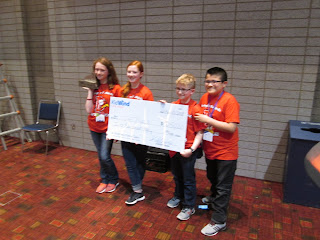 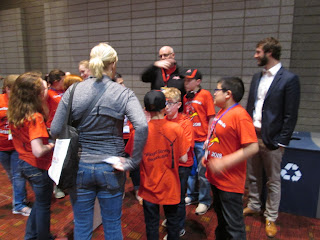 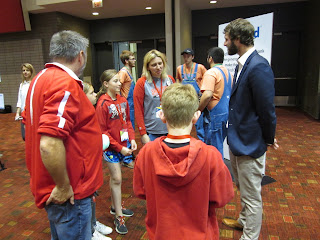 First year, one team ranked 3rd one ranked 5th and another ranked 40th in the nation! It is all about motivation to keep your rank or move up in rank. KW Challenge is one of those educational activities that until you experience it you don't know what you are missing. Once you do experience it you will be saying, "Wow, I want more of this!" When I visit with the Darlington and Shullsburg teams to wrap up the year I hope to challenge them to think over the summer. Every time they see one of the forty-nine 2 MW Vestas turbines on EDP's Quilt Block wind farm as to how they can come back next year and up their game.

Thanks to all the students, coaches, parents, administration, school boards, Kid Wind and EDP Renewables for valuing the KW Challenge.

Remember, "Every year is a good year, some years are just better than others."
Posted by Dick at 12:49 PM 1 comment: