Laying of the lattice 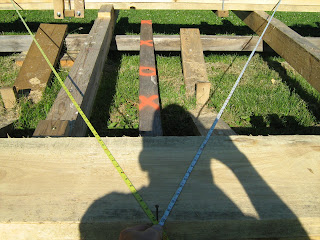 After some careful layout and double checking of the bottom outside chord construction and camber (see last post) it was time to pull arcs from the bottom chord to the top chord and establish the perpendicular vertical line at the midpoint of the truss. Then the top outside chord was cambered and blocked in place. 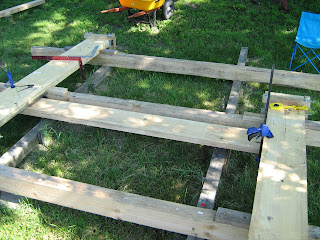 Now the vertical end pieces of the truss were cut to fit and placed at each end. Because the greatest load of the truss is at the ends the fit of these verticals is very important as they help transfer load between the top and bottom chords. The verticals are supported for now with a couple of 2x2's fastened to the underside of the chords. 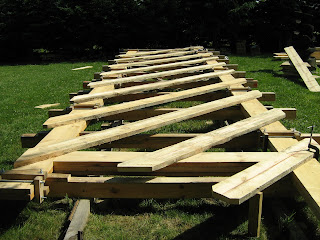 After laying out the spacing and placement of the lattice the first layer of web pieces were cut and placed on top the the chords. I will have to say this is a bit more complicated that it looks. The end pieces are tricky and the filler pieces take the most time. I started out with a drawing of the truss that showed both layers of the web in place. This caused me all kinds of confusion to say the least! In the end I decided to make a drawing for each layer of the web. This allowed me to focus on each piece and see just what I needed to see. I am sure Alex and any other helpers will appreciate this.

Along those lines I will have to say that I am finding the Town Lattice Truss bridge design to be more and more the ideal project for 21st Century Learning. A good mix of hands on task work and higher level thinking. Something for everyone in a class of Technology students where their performance has real meaning and consequences. Don't get me wrong, sure a coffee table or gun cabinet is complicated and significant to the student that makes it but most high school "shop" projects are not. The students realize this and perform accordingly.

Puzzler - How many students could work on this bridge at a time?