These pictures are going to be in the reverse order I wanted them to be in but the Blogspot people have changed the program as to getting pictures up loaded and this will have to do until I learn how to move them around. 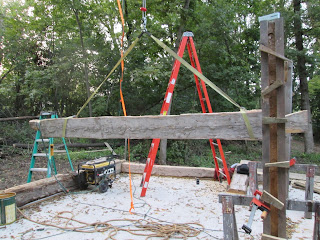 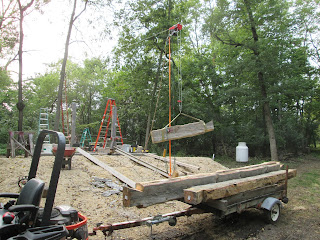 Not wanting to find out the hard way if my calculations and the system was worth of the task I decided to test it out with one of the smaller logs first. Chicken that I am. 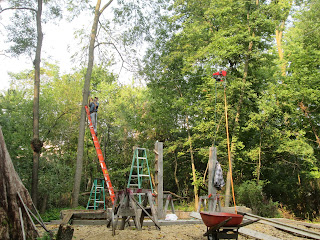 If you have ever tried to stretch out a line you know that pulling it starts to get pretty tuff as the line starts to straighten out. Especially with a 50 pound hoist on the line. A 5/16 inch cable with a 1900 pound capacity was used. Two ton come-a-longs were used to pull it. As they only had a 10 foot cable one was used to start the pull and a second one was used to finish the pull. 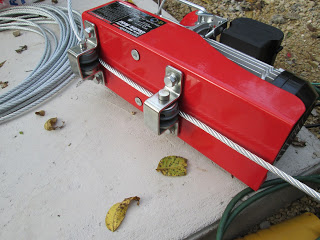 To allow the 1300 pound hoist be able to move along the cable from the trailer to the cabin wall I installed a set of 1 1/2" cast iron pulleys in the hangers. It was tight but with a washer spacer below the brackets the cable cleared the top of the housing. I also had to extend the wiring to the remote control switch as the hoist would over 12 feet. This was tricky as it needs four wires to make the circuit for up and down control.
Here is the drawing of the layout for the Sky Hook 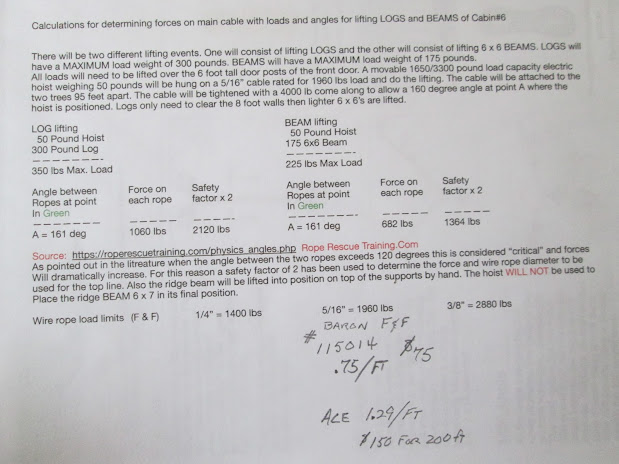 Here are the details on the calculations and the web site I used to determine the forces at play.
In closing all I can say is that this experience allowed me to learn a lot about rigging rope for a system like this and opened my eyes to the engineering that goes into lifting loads with cranes and such. There is plenty of information on the web about this if you want to learn. Finally,  this experience answers the question I asked every day in some the the more difficult classes I had in high school and college, "When am I ever going to use this."