The dis-assembled cabin is at the other end of my 6 acre woods. Logs for one round are loaded onto the trailer and brought to the re-assembly site. Just as luck would have it the Sky Hook line runs right through the center of the cabin. Logs are rigged here with a sling or set of log hooks and lifted off the trailer. 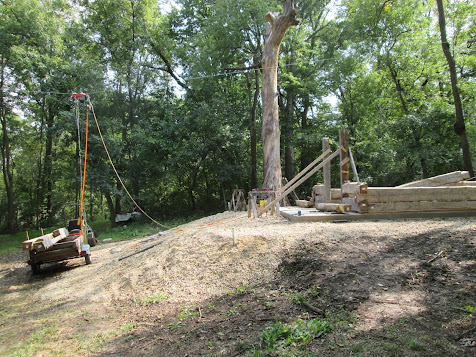 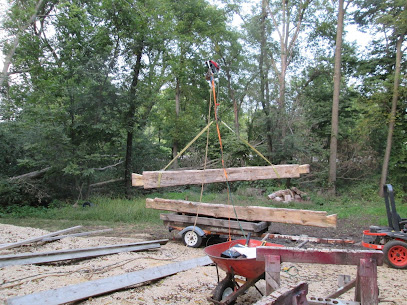 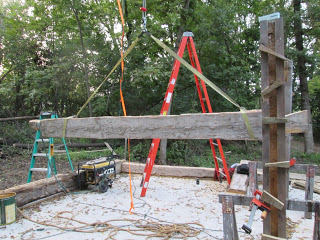 The lifted log is then pulled into the cabin. To keep the lift as low as possible I left the header of the door frame off.  Back and front logs are the longest and heaviest. The lift makes light work of placing them right into position on the wall. Because there is no left or right movement of the hoist side wall logs require a support plank to be placed parallel to the long cabin wall as a temporary support. The hoist is removed. The logs are then inched along with one end on the wall and one end on the temporary support until they reach the side wall where they finally sit. 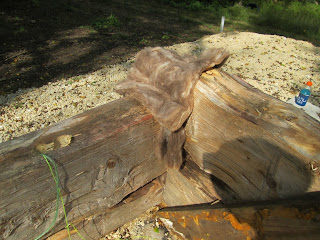 The half dovetail notch area on each corner is covered with a 2" thick pad of fiberglass insulation. This seals the joint. Later the excess that sticks out will be cut flush to the surface of the log and become invisible. 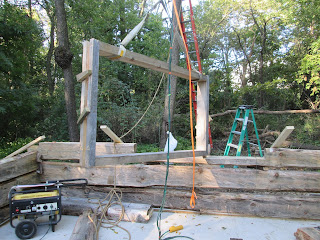 Window frames were set in place using the hoist. 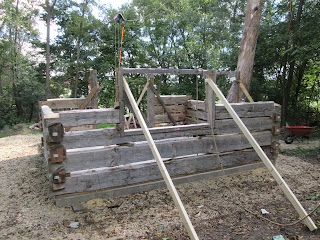 Then they were braced level and plumb. A little side note here. When I went to the local lumber yard to get the four 10 foot 2x4's the guy said, "Gees lumber prices have really gone up." I took it as just shop talk. Then I saw the bill $41.78 !!! Imagine building a house. 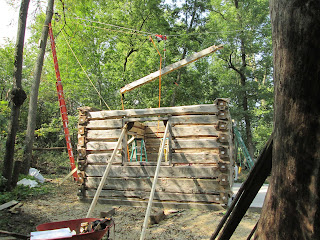 I adjusted the height of the anchor by about 4 feet to be able to clear the door header. Looks like the force on the tree anchor is pretty high. Lucky this is the last of the 7 inch thick heavy logs. From here on up the logs are hewed 6 inches thick. This will reduce their weight to less than 200 pounds max. 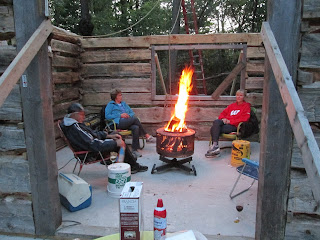 It's not all work. Took a break and enjoyed a nice fire "in the cabin" with some friends. 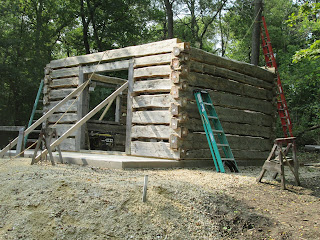 So this is it. Three days work and first level is back together and tied together with full length logs in round 8. For an extra measure I drove in screws in the top corners to make sure they did not move or shift as I begin work on the loft level walls.