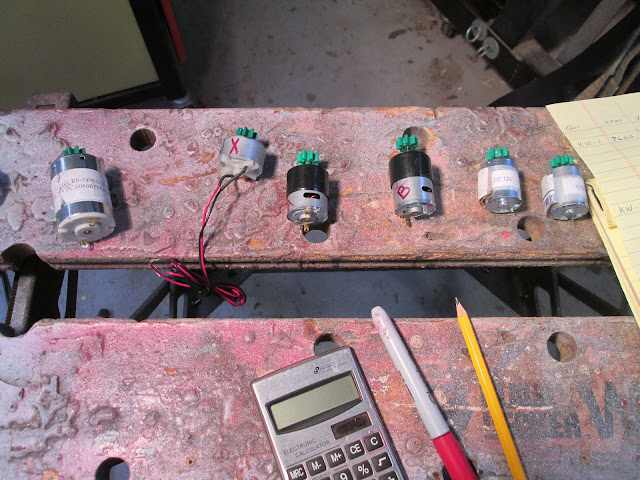 Who would have thought that moving a copper wire through a magnetic field would produce an electric current? Michael Faraday. Well that discovery led to all sorts of things. One of them being the DC (Direct Current) electric motor that uses electricity to produce mechanical motion. When the process is reversed, using mechanical motion, turning the armature inside of a permanent magnetic field, produces DC electricity. That simple?

In the Kid Wind Challenge program we strive to max this out. Designing to get the turbine blades driven by the wind to turn the armature in a generator (DC motor) as fast as possible and produce the most electrical energy. However the speed that the turbine blades turn at is only one part of the electric power producing puzzle. The design of the generator is one of those pieces. DC generators come in many sizes and designs.

In this testing process I will be taking 6 different DC motors shown in the photo above and testing them at different speeds. Rotating the armatures at speeds from 1,000 to 14,000 RPM by 1,000 rpm steps. The electrical energy each produces in 10 seconds with a 30 ohm load will be recorded and compared.

One of the first problems to solve is how to turn the armatures at these speeds. After trying my variable speed hand drill and using a hand held laser tachometer I decided to go with using my drill press. 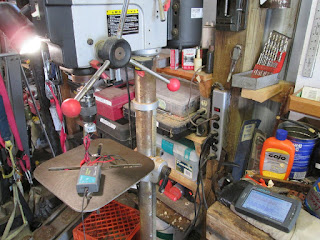 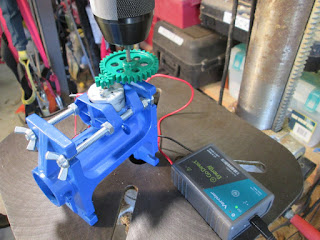 I could mount the shaft of the generator in the chuck and spin it up. With the Vernier energy sensor attached to the generator leads, voltage and amperage could be collected and recorded on the Lab Quest 2 shown on the bench. Easy right? 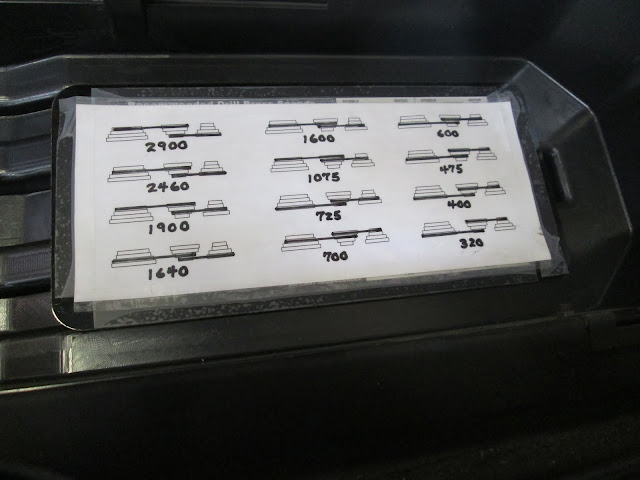 Well even though the drill press could be pulleyed to produce multiple rpm speeds changing the belts each time was a real pain. Also getting rpm's in units of 1,000 "directly" was not possible. Unless... I could place a rheostat in line and "dial in" the speed. Did not take long to realize that the drill press motor did not like this as the starting and running windings fought the process. So what to do? 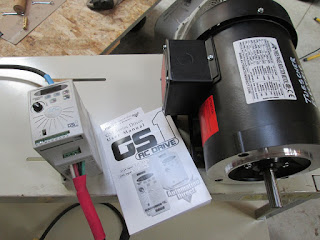 Enter "new" technology. At least new to me. A trip to Tuescher Electric was the answer to my problem. Don fixed me up with a frequency control drive unit and a 3 phase motor to do the job. Whatever frequency the control unit was set to, was the speed (rpm) that the 3 phase motor would run at. How cool is that. 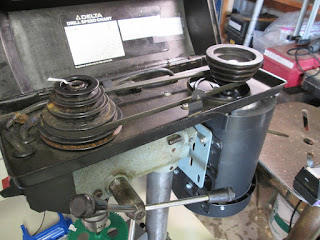 I had an old Delta bench top drill press that I could modify by swapping out the single phase motor with the 3 phase one. 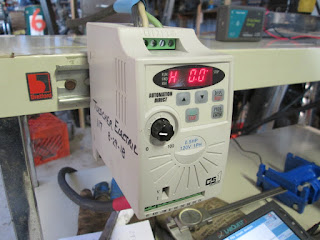 Oh this was going to be a snap, just turn it on and dial in the frequency and you get the rpm you want to test at, right? Well lets not get ahead of ourselves. 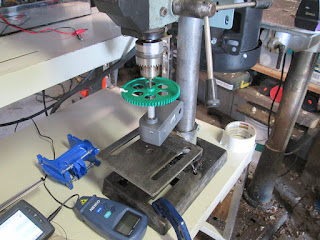 First there was the pulley ratio of the drill press to consider. Then there was the gear ratio between the driving gear in the drill press chuck and the 8 tooth pinion attached to each generator input shaft. Plenty of calculations and ratios to consider to get workable combinations. After all 14,000 rpm is a handful. Also there was the nagging doubt that my calculations were wrong. Could be lost and not know it? So I attached another Vernier sensor to measure the rpm (in radians, another new learning step for me in the S.T.E.M. curriculum) thank goodness for the internet. 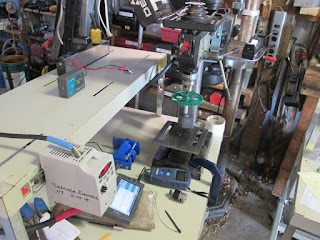 So this is the final set up for the Generator RPM Testing Station that can be rolled into any classroom and used by Kid Wind Challenge teams to test out the performance of their generators and different rpm. Then use this data to design turbine blades and gear ratios to achieve that speed and energy output. Just like they do in the real world of wind generator turbine design. 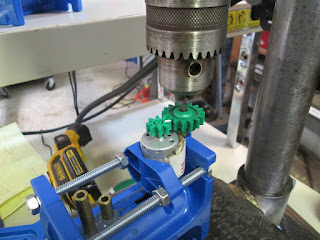 On deck, the devise to measure the drag and lift of an individual blade design in the wind tunnel.
In the hole, the system for cutting and assembling airfoil blades with a twist from styrofoam!
Go Kid Wind Challenge teams.
Posted by Dick at 8:04 AM