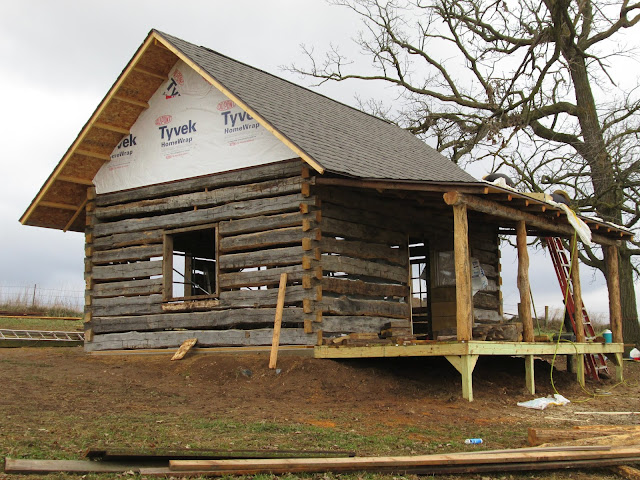 Added on a nice porch to the cabin and it looks great. Nice touch. Gable ends will be covered with vertical boards from another salvaged building Lynn saved. 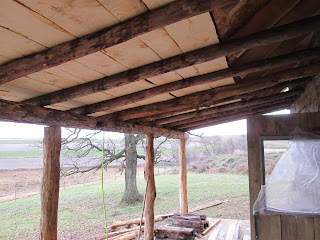 For the porch posts Lynn used logs salvaged from an old family farm barn. The rafters came with the original cabin logs. The roof boards were cut from some trees off the farm. Going to be able to enjoy a nice cup of coffee from this porch.

Now for the "step by step" 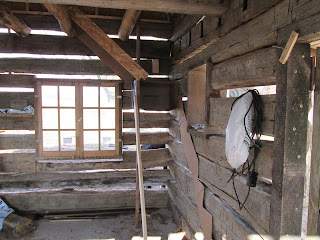 To get into the loft Lynn wanted stairs and not a ladder. Right off the bat I said no problem. (One of the three biggest lies. 1. The check is in the mail. 2. I'm from the government and am here to help you. 3. No problem, this will only take a minute.) As the cabin developed I could see more clearly what I was up against. A door and window on one wall. A window on another wall. And the floor joists in the loft. As I played this out in my mind and several sketches my brain was racked. I knew I would need a landing and the total rise for the stairs and each run. I decided to make a cardboard pattern and this showed me some of the details and finer points of the construction I had to consider. 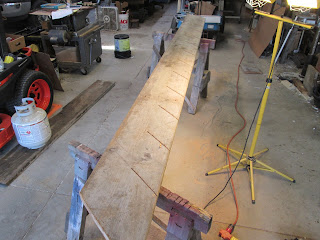 After a good nights sleep I decided it was time to cut wood! Lynn's husband Steve had some since 2x12's that he saved from a trailer he redecked and they were perfect. I layed out the first stringer as though the stairs had no landing using the two runs. Then layed out where I would need to cut them off. Using the two pieces I had patterns and cut the mating pairs of stringers. 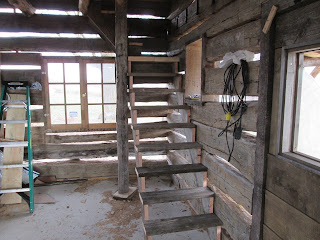 It took a couple of hours but they fit well and cleared the windows and door.  Building the box frame to support the landing took the most time and then locating the vertical post that was need to support the loft floor joist that had to be cut off was another head scratcher. 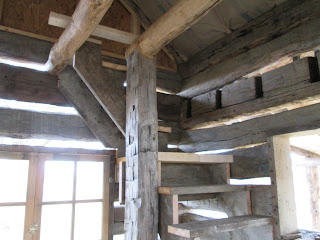 Here you can see the post where it supports the floor joist end. Floor boards for the loft will come next. 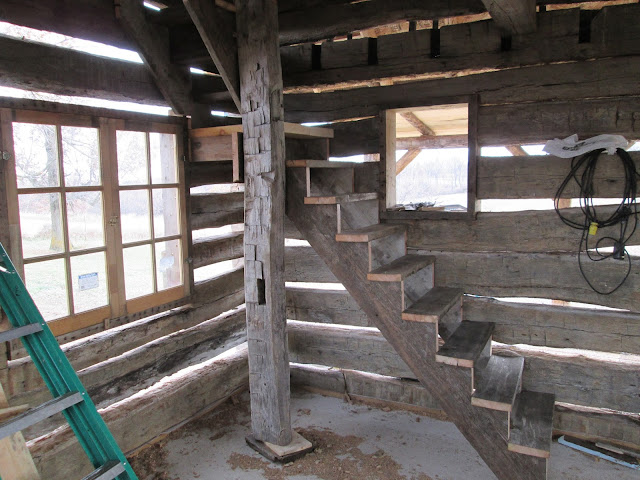 And there you have it "step by step". Progress continues with a bit more work to do (floor, ceiling, windows, gable ends, chinking and trim inside and out). I would say that cutting steps like these were a challenge and I learned a lot. Stairs in the next cabin will be "no problem"!
Posted by Dick at 4:50 PM