Let there be light...

Time to add a little power to the bridge to brighten it up at night. I had a 350 watt, 12 volt PV battery system that I built several years ago for a high school class on renewable energy I was teaching just sitting around. The class project system was featured in Home Power magazine Dec '99/Jan 2000 Issue #74 pages 24-30. All the system details can be found on line in this article. 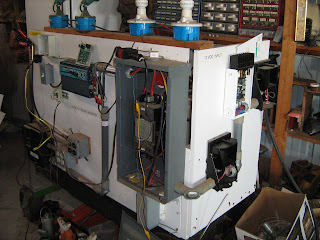 Powering up the bridge with lights at night would be a good use for the system. One would think this  system is way over kill for just four 16 watt CFL's but we'll see.  Time will tell. There will be some shading of the panels because of the location but the excess PV capacity should more than make up for it. I hope. 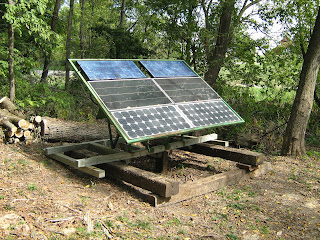 Things tend to get messy pretty quick with all the components and wiring that goes into a battery PV system as you can see below. Two 6volt deep cycle batteries, battery monitor, charge controller, fuse box, inverter and lights. For new construction component placement comes first and then the wire cut and routed. On this recycle project I found it best to just connect the components with existing wire lengths and then place them where they fit. 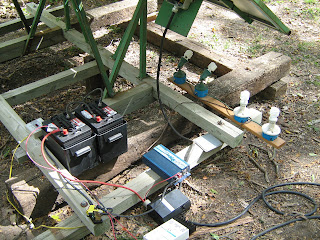 And the final results were efficient and pleasantly surprising. 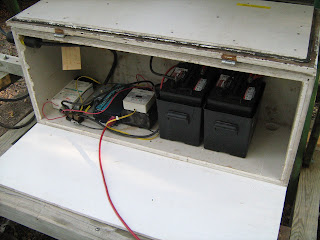 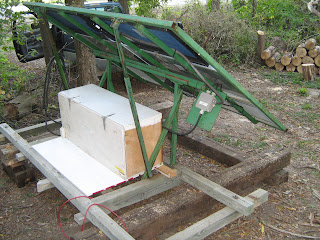 It was a pretty sunny day yesterday so I collected some data on the new system. In a nut shell - From 1 to 3 pm the PV generated 7.2 Amp hours of power to store in the batteries. I turned on the four CFL's for one hour and they (along with the inverter) consumed 10.1 Amp hours from the batteries. Hopefully I can count on 2 - 3 more hours of morning sun. In the meanwhile I'll be doing more data collection and testing to report in a later post.