Most people would give the obvious answer, because there was no electricity at the time. Well I would say that even if electricity was available many cabin builders might have said, "No thanks to much trouble running the wires in the logs."

I can report that there is a lot to think about (number of circuits, number and location of outlets, lights and switches, etc.) if you plan to wire a log cabin and want to run the wiring through the logs and not on the surface of them. This is my first try at it and here is the story... 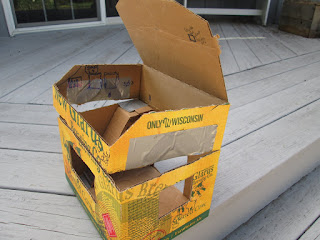 Step 1 - I like to model things up in 3D and get the feel for things. I needed a box that I could cut up putting in the door and windows plus the second story loft. The Spotted Cow box (sold only in Wisconsin) was just right but, first it needed to be emptied. It was a job that I could enjoy and do while I was planning the wiring out. Even had a friend help me. 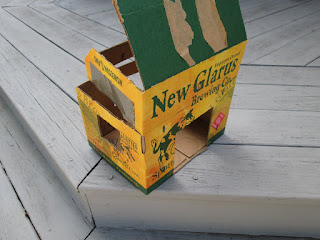 You can see some of the markings inside of the box and the ceiling fan and lighting for the stairs going to the loft would be installed in the roof (box lid). 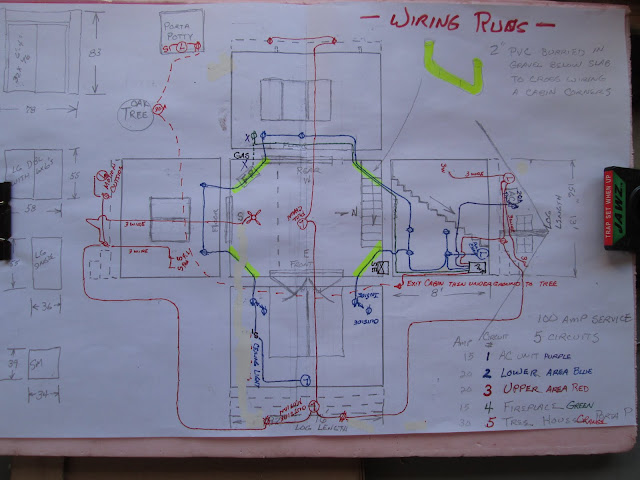 I made a plan drawing of the four cabin walls folded back from the main floor and used different colored Sharpie markers for each circuit. The under ground service entrance must have a 200 amp meter socket and a licensed electrician approval before the power company will hook up. Then the wire will come through the logs into a 100 amp Square D breaker with 12 slots. Number of circuits, 6. One circuit will go to the propane fire place. One circuit go up to the loft for an air conditioner. Another circuit will go outside and under ground to the porta potty and "tree house" (a future project). The down stairs (in red) will have two circuits and the loft will have another circuit. 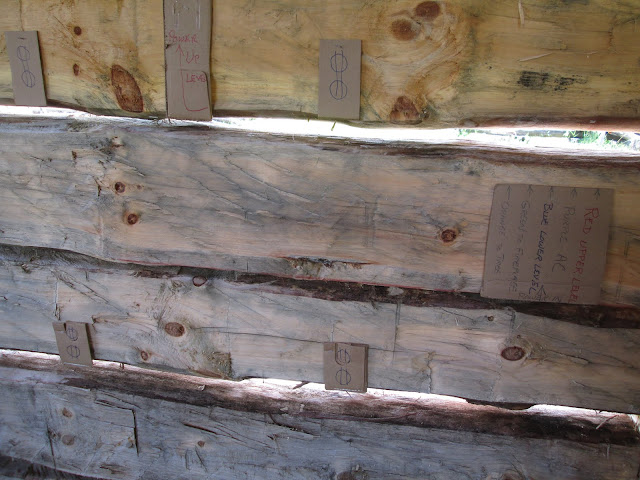 Next determining the actual electric runs and circuitry needed in wiring for outlets and switches. Three wire conductor will be needed for the stair lighting and the ceiling fan/light will need it also. I decided to staple up cardboard to represent the different components (thank goodness I could cut up the Spotted Cow box I used for the 3D model and did not need to empty another one). Now 1.5" diameter holes will need to be drilled down through the logs for vertical wire runs. The openings between the logs will be used for horizontal wire runs and be concealed by the chinking. 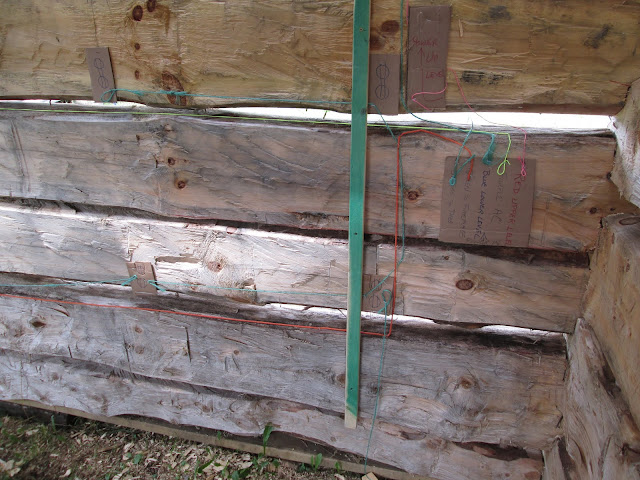 The last step was the run different colored string for each circuit out of the 100 amp distribution box. Doing this gave me a clear picture of the actual wiring pathways. I could then determine where the main vertical runs would be and placed colored 2x2's in those locations on all four walls.

It needs to be understood that wires cannot cross from wall to wall through the corners because of the notches. The answer to this problem is a U shaped conduit buried below the concrete floor at each corner with the ends brought up through the sill plate the cabin logs will sit on.

The last thing that needs to be considered is the drilling of the holes. For a cabin that is not going to be dis-assembled and moved all this has to be figured out and holes drilled "as you build" or have some mighty long drill bits! In my case I will need drill the top log in the vertical run and into the log below it. This will mark the location of the hole in the lower log and when the top log is removed and the process is continued down though the entire wall using just an 18" long drill bit.

I will also be cutting out pockets for all the outlet and switch boxes into the logs before the take down. So now when asked why pioneer cabins did not have electricity in them I know the "real" answer.
Posted by Dick at 12:14 PM