What do Safety, Tower Climbing and KidWind all have in common? Well if you are on a KidWind Team at Darlington Middle School you learn a lot about the design, building and testing of model wind turbines to produce electricity. Then if the you are lucky you get to see and learn about climbing wind turbine towers, the equipment used and the attention to safety that everyone in the industry must consider and maintain. SAFETY is number one!

I learned about ENSA (ensa-northamerica.com a Division of Mallory Safety and Supply) located in Mukwonago, WI at last years National Kid Wind Challenge in Chicago. There I met, director of operations,  Valerie Marquis and we talked about the KidWind program and what the kids were learning. Since safety in the wind power industry is their business I thought this would be a great opportunity to expand the learning for the KidWind Teams so we set up a demonstration/presentation in Darlington on my wind turbine tower next to the school.

I cannot say enough about the ENSA people and the work they did with the Darlington Middle School KidWind teams this past Friday, April 26, 2019 but I am going to try. 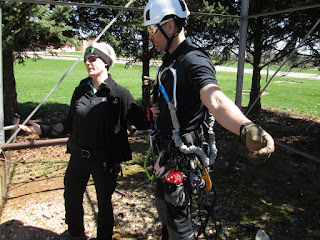 The weather was great! April Vollm and Rob Siegel from ENSA arrived early to look the tower over and rig the lines that they would use for the climbing demonstration and rescue of an injured climber from the tower. Students were told that this type of training is required by OSHA every two years, from people like April and Rob, for wind turbine climbers to be certified to work. 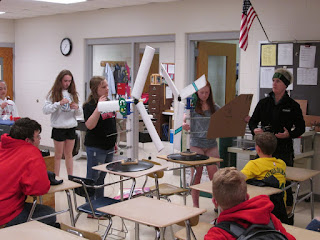 April met in Roger Zee's tech ed room (Roger is one of the three KidWind Team coaches in Darlington) with the KidWind Teams and some of Roger's students. The KidWind teams showed April the wind turbines they built to win the 2019 Wisconsin KidWind Challenge in Madison and have been improving (adding a yaw system) to compete in the National KidWind Challenge on May 21-23, 2019 in Huston, TX. April explained some of the work she does and how important SAFETY is to everyone. Especially in the wind energy industry. 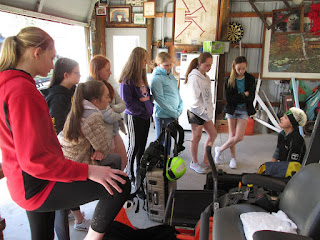 From the classroom it was over to the workshop at my home and some "show and tell" about the equipment, how it works and how it is used. April is a natural at this, keeping the students engaged and encouraging them to ask questions and learn more about what they were hearing and seeing. 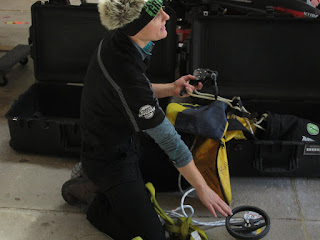 One of the main pieces of equipment April showed the students was the 50:1 ratio winch that she would be using to rescue Rob (playing the injured climber) in the demonstration. The girls could easily relate to the ratio as the wind turbines they built have a 1:32 ration gear train to drive their generators. 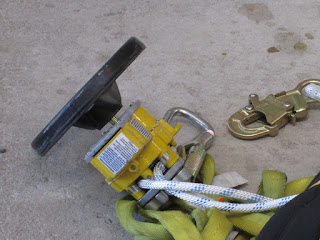 I cannot help but to imagine that some of the girls knowing the make-up of the gears for their 1:32 ratio and how they are assembled thinking how the 50:1 ratio and what type of gears are used in this piece of equipment. The design? The engineering? The application of something they learned in KidWind. Priceless! 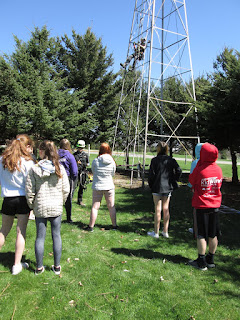 It was time to get out and see all this equipment and training put to work, up close and personal. Rob and his helper had rigged the lines on the tower. After a "Buddy Check" (climbers always work in pairs) Rob climbed up the tower and prepared himself to be rescued. April continued to engage the students using the same terminology she does with actual turbine technicians training in the field (Buddy Check, PFP, Self Evacuation Kit, Limited Fall Arrest, Anchor Points, Helmet Ratings E and C, Connecting Devices and Cows Tail just to mention a few). 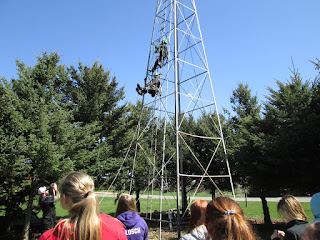 Now for more good stuff. The climb. April in the green helmet has climbed up the tower after assessing the situation, calling the rescue people and determined the course of action needed. She has placed herself above Rob and determined that he needs to be lowered safely down from where he is to the ground and waiting emergency personnel. Rob easily out weighs April by 100 pounds. She attaches the winch to the tower above Rob and make the necessary attachments. 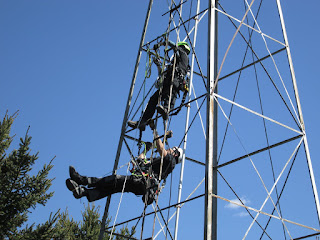 After making the connections Rob is being lowered down safely to the ground for a successful rescue and treatment by EMT's. If this was an actual rescue in a wind turbine tower all the equipment and rigging would be left "as is" in the tower for the accident investigation crew. This is done for several reasons but one of the main reasons is to learn from the accident and make any necessary corrections to equipment or procedures to prevent it from ever happening again in the future. SAFETY really is number one in the wind energy industry. 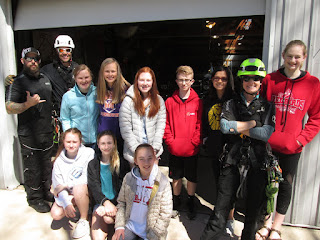 And THANKS to ENSA and people like Rob and April these Darlington Middle School  KidWind Team members get it! They know, just like the people that run and service the Quilt Block wind farm that EDP Renewables operates in Darlington, WI.    SAFETY IS NUMBER ONE!