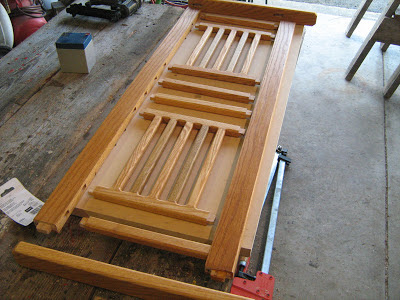 Back of Bink's bench is coming along nicely, should have it done by Thanksgiving. Plenty of mortise and tenon work on this piece. 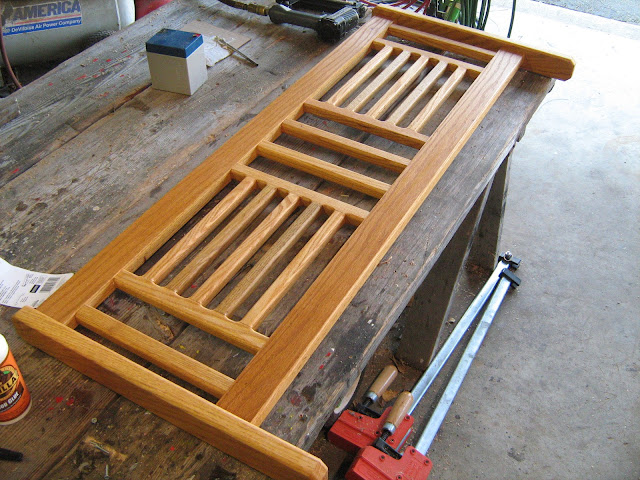 Got a good fit on the joints and softened the edges with a 1/4" round over bit in the shaper.
Now just have to mate the back to the bottom and this project is done.  Bink would have enjoyed watching my progress from his kitchen window across the street. And that brings me to another story about my neighbor.

I had been doing several chainsaw wood carvings one summer and on some of my many breaks I would wander over to Bink's for a visit and to see how he thought the carving was coming. The carvings would always start off pretty rough and were hard to identify. Bink had a good eye though and had studied many of my carvings "in process". He made some pretty good guesses on what the final carvings would be and we would enjoy talking and joking about it.

A week or so later I set up a new log for carving and began the process. This time I noticed Bink had opened up his living room curtains and it looked like he was going to change his point of view. I carved away for most of the morning making some major cuts but by no means to the point of where anyone could tell what the finished carving would be. After lunch Brink drove out to check the crops and I thought I would play a prank on him. I moved the carving out closer to the road and than put up a big blue tarp that I had around the carving. For the next four days I spent several hours on and off "carving". I would go inside and carve. Even after I finished the carving I continued to go inside the tarp with my saw and "carve away". I cut and re-cut the pieces. On many of my trips to the mystery carving I could see Bink in his window and gave him a big wave and hi. We had some fun talking about that carving later that summer.

Bink had one of those riding lawnmowers (Dixon ZTR) that you steered with two levers and required both hands to move. It was always fun to give Bink a big friendly high neighbor wave and see if he would let go to wave back causing the mower to go off course. No matter what he always smiled! I think he was on to me.
Posted by Dick at 3:29 PM