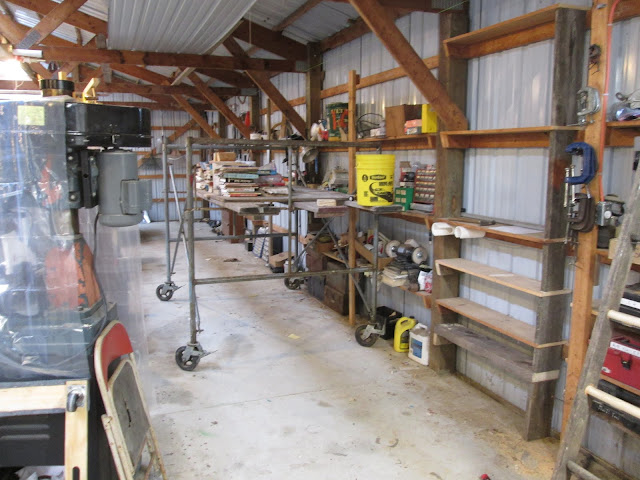 Thirty+ years ago I built a nice 30' by 63' pole shed and began the process of storing my "valuables". The shed and the process served me well during the warm months but in the winter it became "The Freezer" and after working on projects wearing gloves and standing by a small propane radiant heater on a 25 pound tank it was time for a change. This project has been in the works for a few months but now with the Covid -13 shelter in place rules seems like a good time to make it happen. I will be partitioning off a 15' by 40' section of the shed to be used as my new heated workshop area.

The process began with clearing a pathway along the wall for the scaffolding that will be needed to install the 40' long double 2x8 ledger for the ceiling rafters to sit on. This ledger will be attached to the 6x6 posts that are below the frost line. This is necessary because the floating slab floor lifts up during the winter freeze. 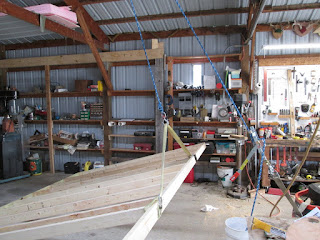 Here you can see the double 2x8 ledger in place and now I am raising the end wall frame. This is going to be pretty much of a one man project so using a lot of "low tech" mechanical lifting devises will be employed. I am using my new continuous rope puller here. The beauty of this is that unlike the standard cable come along that has a limited 10' pulling distance I can use any length of 1/2" rope. And I have plenty of rope! 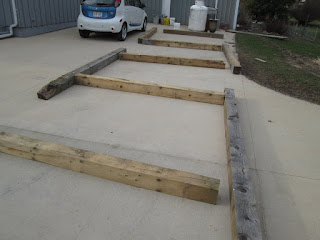 Another design feature (and benefit) of the workshop will be that none of the load from "valuables" being stored above will be placed on the pole shed 2x6 bottom chord roof trusses. By using 2x8's the workshop ceiling rafter system will float above the bottom truss chords. The ends of the 2x8's coming from the ledger will sit on a post and beam system made of rough sawn 6x6's that I had from some pine logs I bough a few years ago. In the picture you can see the 5 posts and the 4 ten foot long header beams layed out on the driveway. 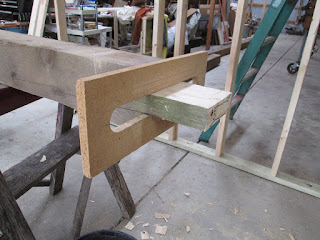 You may be asking why 6x6's? A couple of reasons, first there will be two 10' wide sliding doors in this wall and spanning this distance would require a double 2x10 plus a lot of 2x4's and second I already had the 6x6's. Cutting the joinery for these would also be somewhat therapeutic! So I will cut thru tenons on the top of the posts and slot the ends of the top beam. In the picture you can see the thickness gauge being used to check the thickness of the standard 2" tenon. 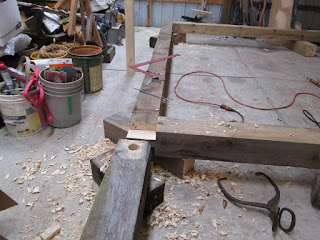 After the posts were cut it was time for cutting the beams. Since this is rough cut timber I decides to make the out side surface where the sliding doors would be mounted to be flush. To accomplish this I would loft the posts and beams on sleepers and then make the layout for the beam cuts. 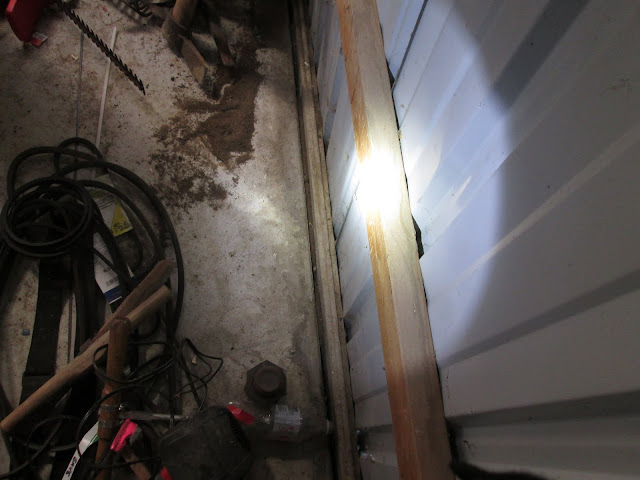 OK so just when I was getting into it I became distracted by one of the drawbacks to my floating slab. The frost in the ground, in the winter has a nasty tendency to expand (like leaving water in a bucket outside in the winter). You know what happens, right? As the ground freezes it expands. Well over the years the ants, yes ants had been building nests on the back side of my shed. I had been doing battle with them for years. Never seeing any ants inside the shed I was content. Little did I know what was going on between the concrete slab and the bottom rim treated 2x6. They had hauled in dirt from their nest building and placed it in this tiny gap. Over the freeze thru cycles of several years and their annual nest building Mother Nature had now given me a 1" gap and bowed back wall. So now would be the time to correct it. I began by removing (with forced air) the dirt particles. The wall did not spring back as I had hoped. Another remedy would be required. WABF (Wild Ass Brut Force)! Pictured above, looking down at the floor and rim board you can see the gap and some of the particle material. 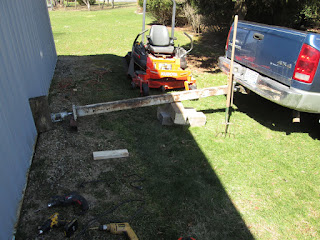 The WABF fix started out with my Kabota lawnmower but that proved to be to lite. I had to use my truck as the blocking point and then jack the wall back tight to the slab. Concrete screws secured it in place for now. Dirt will be packed in to hold it and then the screws will need to be removed because of the way floating slabs work. If the screws are not removed then the heaving slab will break the rim board and/or buckle the wall tin ! 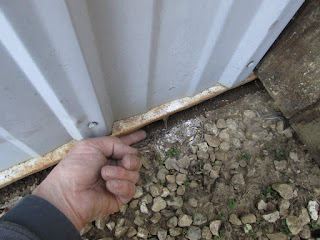 Here you can see the gap that was left on the outside when the wall was pushed back into place. Those ants will be treated to a generous portion of ant poison this year I promise.

That's if for now. More to follow in the days to come.