As the saying goes - I hear, I forget. I see, I remember. I do, I understand!
For sure, so it is with laying out and cutting these tricky scarf joints for me. 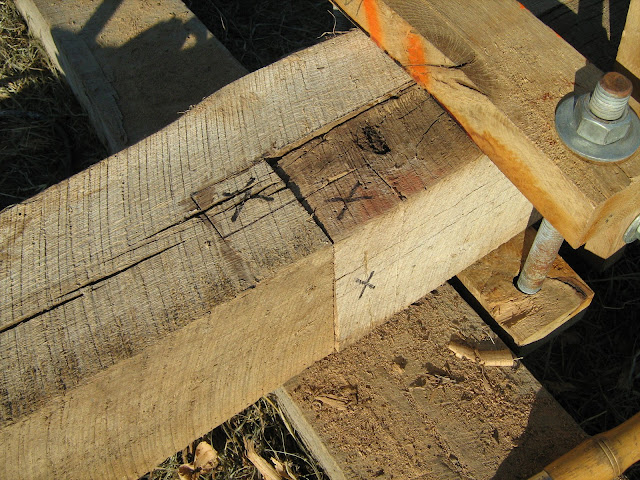 After making the half cuts and fitting them up it was time to layout the blades. The ol' bridge clamps came in handy here. 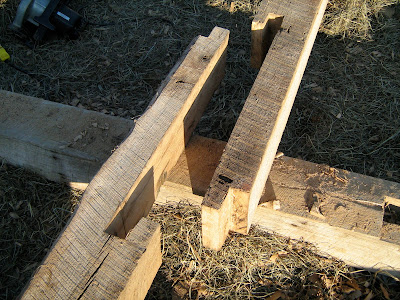 That was not so bad. A trial fit and a little fine tuning and this joint will be good to go! 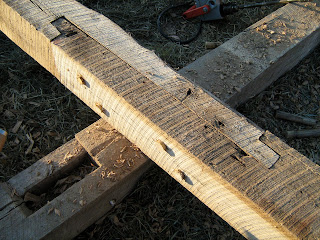 And here it is. One fine Bladed Scarf joint. Ready to be put up on the front wall of the cabin. 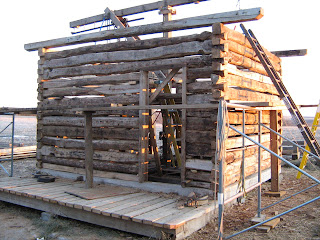 Since the roof rafters will be setting on these two 18 foot top logs I want to get them as level as possible and have their top surfaces all in the same plane. Let the calculating begin. After that little task it will be on to the joint supreme. I made a model for practice before I tackle the 6x6 real deal.

Tabled, Squinted and a Wedge. Should be some serious fun. Keep watching... 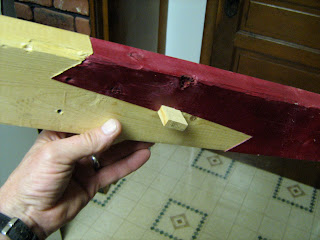 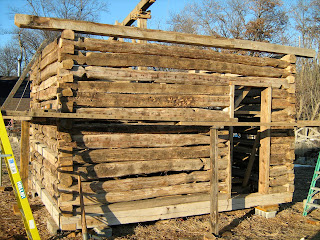 Looks a lot easier in the books! Thought I would try it out to make the 18 foot top log I needed for the cabin. A challenge but good experience. 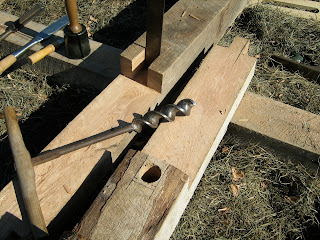 With the rough cuts made it was time to test fit and saw the kerf for a tight fit then cut the bridled ends. 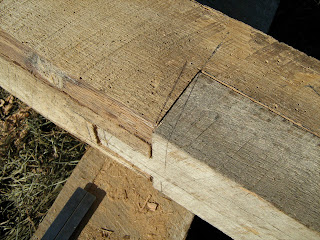 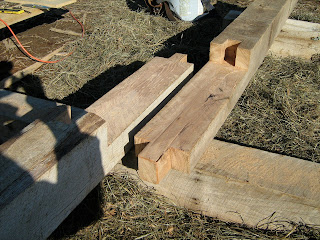 The Squint was then laid out and knifed in on the pieces. With the final cuts made it was time to assemble and pin the joint together. Mission accomplished! 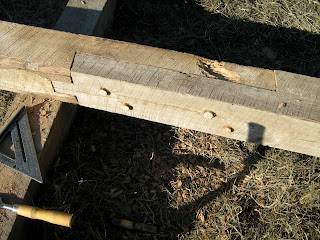 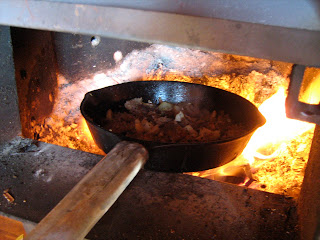 After a nice lunch of fried meatloaf and potatoes I'll go to work on the front 18 footer. Maybe I'll do a Half Scarf - Bladed joint for this one.

I have never been accused of making things easy, so why start now? Always enjoy a good challenge and these joints do the trick nicely. They will be used on the ceiling joists to tie the cabin walls together. 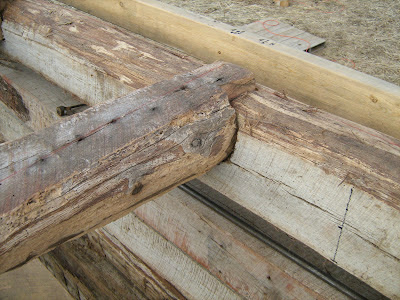 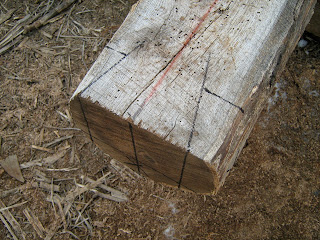 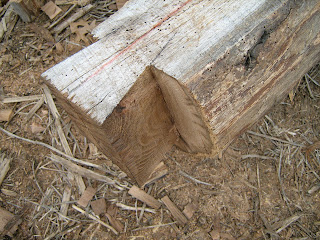 After cutting the joists to length the dovetail was laid out and cut. Measuring down from the top surface 4" the bottom of each dovetail was cut off flat. 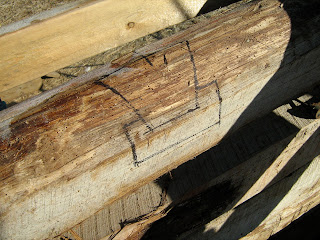 Using each joist as a pattern the dovetail socket cut was traced onto the top wall log. Getting the correct depth and housing cut required some scribing and careful work with the dividers. 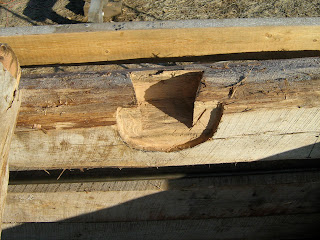 Just above the cut out dovetail you can see a 2x4 batter board that was placed outside the end walls. The top of this 2x4 would be the finished height for each joist. With the joist in tracing position this provided a reference point to measure down from and the depth for each individual dovetail socket cut and housing. 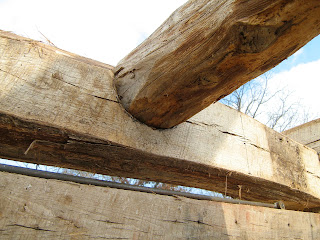 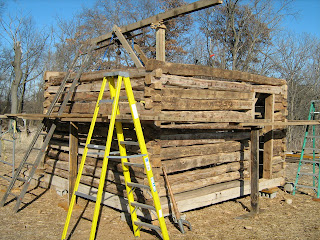 With the ceiling joists in place it was back to work on the walls. Round 11 in place and only 2 more rounds to go and the cabin walls will be done!
Posted by Dick at 5:09 PM 1 comment: 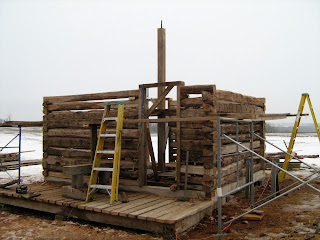 As a child growing up in the 50's I had an Erector Set and have fond memories of the many hours spent building with it. Thinking now, how much fun I had with it as a kid, imagine at the time, the thrill of being some of the people developing the Erector Set product itself!

When working on projects, problem solving, is the frosting on the cake for me. As the height of the cabin walls increased I began to think about the effort that would be needed in stacking and unstacking the 250 to 300 pound logs on to the walls. I decided to use some of the salvaged barn materials and assemble a jib crane to do the job. 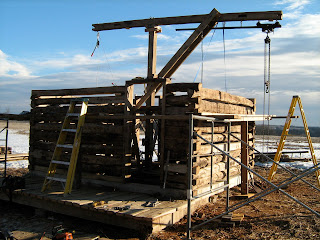 It took the better part of a week and a bit of head scratching, but was a great learning experience and it works very well. I had a plan in mind and did some drawings to determine the height and reach I would need. The height is such that the roof rafters will clear the boom so it will stay in place until a home is found for the roughed in cabin. 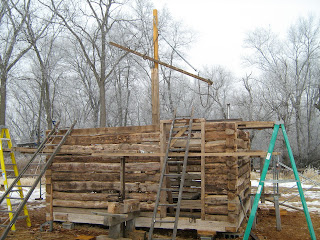 After setting up and bracing the 14 foot 6x6 main mast I added a 5 foot Gin Pole to it so that I could raise the 16 foot 6x6 beam and place it on the top pin. I have found that it is a good practice to test things like this (proof of concept) with a light load first, a 12 foot 2x6 in this case, before doing the real lift. The 300 pound oak main beam proved to be a real handful to say the least! 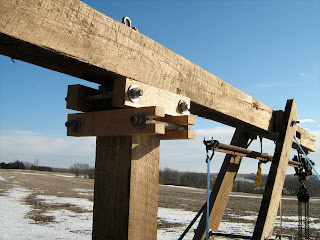 With the beam set on the 1" diameter pin drilled 10" deep into the mast I could see that some reinforcement might be in order to keep the pin from splitting out the top. I had some nice oak clamps left from last summers bridge project that did the trick. 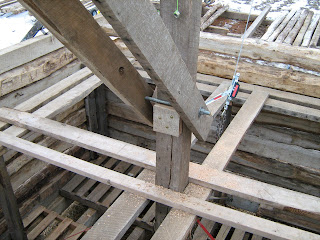 Sometimes the first idea is not the best idea and this was one of those times. I had planned on using 4 oak blocks to anchor the knee brace. To rotate the top beam I would use the come-a-long to lever up the long end of the beam, remove the pin and let the brace arm swing down. Then I could rotate the beam 90 degrees and put things back together to do a lift. Trouble was that I had to do the rotating with the come-a-long off and the 10 feet of beam (long arm) really put some stress on things to say the least. I would need to "round up" the square mast so that I could leave the pin and brace arm in place while rotating the beam. 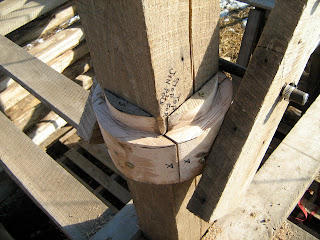 Simple enough,  just make a nice round collar to put around the square mast. 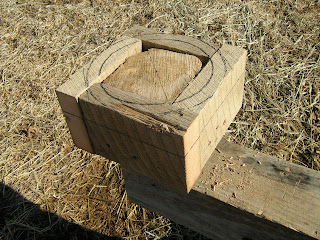 Started by wrapping a 6x6 with 2x6 pieces and laying out the diameters I needed. A few cuts with the chainsaw to trim off the corners. A few more cuts to get the depth for the shoulder where the pin would ride and... 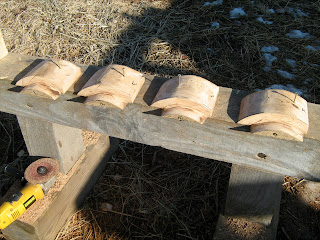 Bingo! I had my four little problem solvers. Just screw them in place on the mast, add a little grease and now the knee brace could stay in place supporting the long end of the beam during rotation. Problem solved! 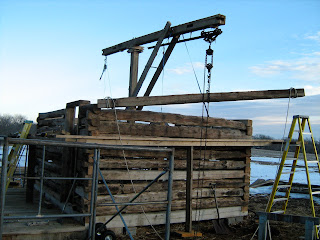 And here it is lifting one of the logs up onto the wall. Back to work. Sweet!
Posted by Dick at 6:02 AM 1 comment: