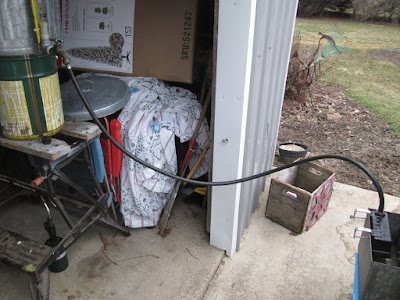 So if you have been following the process you know what this is a picture of. BUT,  did you know the best conditions for sap "flow" are cold nights and warm days. Now can you imagine the problem/s this can cause to a smooth "flowing" maple syrup making process? Maybe not, so we should pause for a moment and think about this over a pancake covered in syrup and have one of those memory making moments. Hey, If your are home schooling there is something at the end of this post for students to work on.

This Syrup Making Memory (good title for a book some day) goes like this. 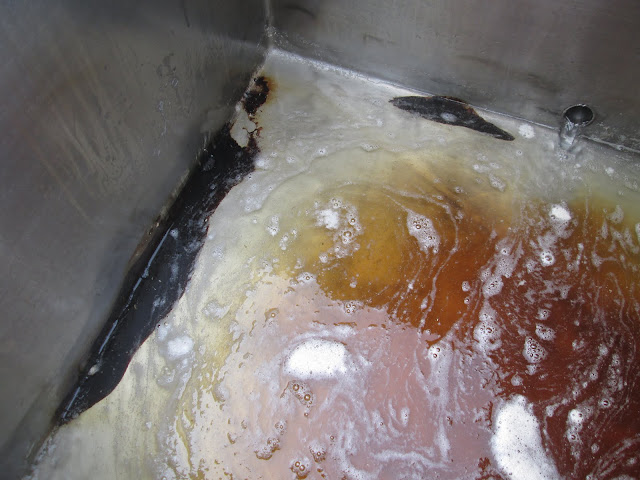 Yeks! I'll tell you what could go wrong. The cold (freezing) night froze the sap in that little black hose connecting the sap supply can to the stock tank float that controls the level of sap in the cooker. So with the supply sap froze off the boiling in the cooker kept going while I enjoyed my coffee, newspaper and breakfast. With the liquid level boiling and going lower and lower until the edges of the boiler became "dry" and the sugar started to burn (ugly black stuff). The burning is avoided in in the finishing process by constant stirring of the syrup to keep the edges wet. This could wreck everything! Years ago I had a 2 foot by 4 foot pan I made for boiling light on fire while I was fixing shoes in my shed just 20 feet away!

Lucky this time I caught it just in time. I would drain the partially finished syrup and then scrub out the boiler, this would require a power tool. With the boiler cleaned I could return the syrup to the boiler, thaw out the feed hose and continue the boiling process. Remember the pictures of the red liquid in the last post? This is what 2 gallons looks like in the boiler, that means 80 gallons of sap and 16 hours of boiling. Whew, close one. 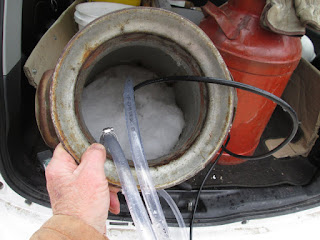 The good news out of this is that the freezing night caused the water in the sap collection bags to freeze making the sugar content in the remaining liquid sap more concentrated. This is a very good thing. Normally it takes 40 gallons of sap to make 1 gallons of syrup. With the more concentrated sugar in the sap it takes fewer gallons and less boiling time. In the milk can you can see the slush remaining. This is just frozen water from the sap and is dumped out. Note: Fellow teacher Jim Benson was with me fixing shoes the night the pan caught on fire and he got the idea to fill 5 gallon buckets with sap, put them in his chest freezer over night. The water part of the sap would freeze around the edges of the bucket. Jim would then pour off the remaining liquid into his Turkey Fryer and make his own syrup in his driveway.

REMEMBER - AT THE END OF A PERFECT DAY,  LOOKOUT THE DAYS NOT OVER YET! 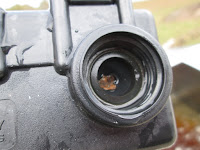 See the little brown thing in the center of the ring? Such a small thing, right?
As a retired teacher I know that if you do not learn from your mistakes you will be forced to repeat them. So I made it the practice to set my timer whenever I was cooking sap and check in on the boiling sap every hour on the hour. 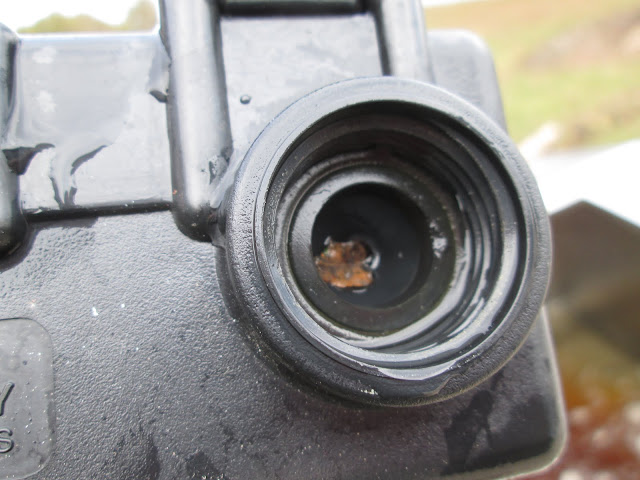 Well later in the day this small piece of leaf got into the sap supply can and made it through the little black feed hose to the stock tank float where it blocked the flow of sap to the boiler. Through out the day I diligently made my rounds ever hour on the hour to check the boiling process. That darn leaf must have plugged the flow just after I made a check because on my next round I could see (actually smell) the liquid level in the boiler was getting dangerously low! WHEW 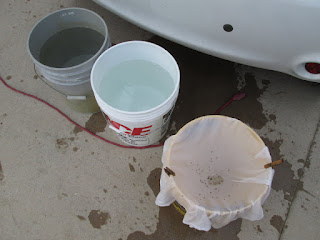 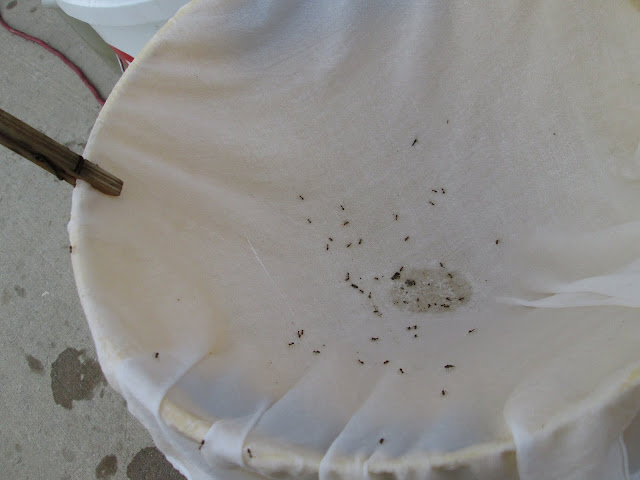 Now with the weather getting warmer the ants and flies want to get in on the process. The blue bags used for collecting are open on the ends and the ants love the sweet sap. So they now need to be filtered out in the collection and transfer process along the way before boiling. 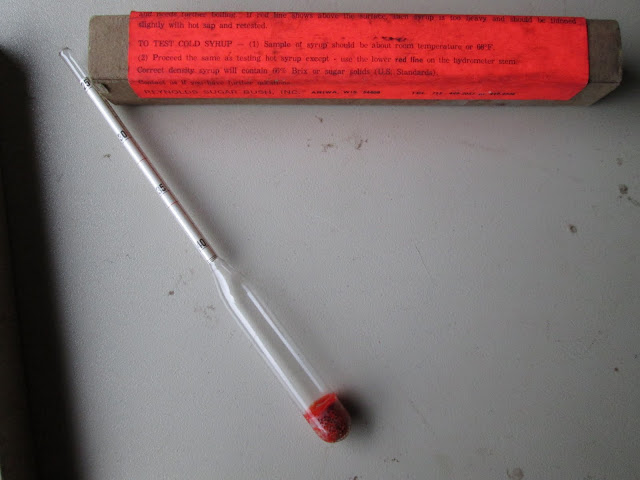 This is the Brix Hydrometer (sorry for the lousy picture) that I use to measure the density if the sugar content in the finished Maple Syrup. The standard for maple syrup sugar content by volume is 66%. There are two red lines on the hydrometer. If you look close you can see them just above and below the 35 (the numbers start at 40 then up to 35 then 30 and finally 25 at the top. Written on the scale inside the glass is "Baume for Maple Syrup, Tp. 60 deg. F") The bottom red line is for Cold Test 60 deg. F and the top red line is for Hot Test 211 deg. F.

What  is the Brix scale talking about?
How does a Hydrometer work?
What are the parts of this Hydrometer?
Why the two different red (hot and cold) rings?
How does the 66% "standard" relate to the 40 gallons of sap to make 1 gallon of Maple Syrup?
Is there and Maple Syrup Makers Association?
Where can you get supplies if you wanted to make your own Maple Syrup?
How much could it cost to make a little or a lot of Maple Syrup?

I can tell you that my system can boil down 14 cm of liquid sap from a 20 gallon garbage can every 60 minutes.

Can you figure out how many gallons that is?
Can you find out the diameter of a standard 20 gallon garbage can is? 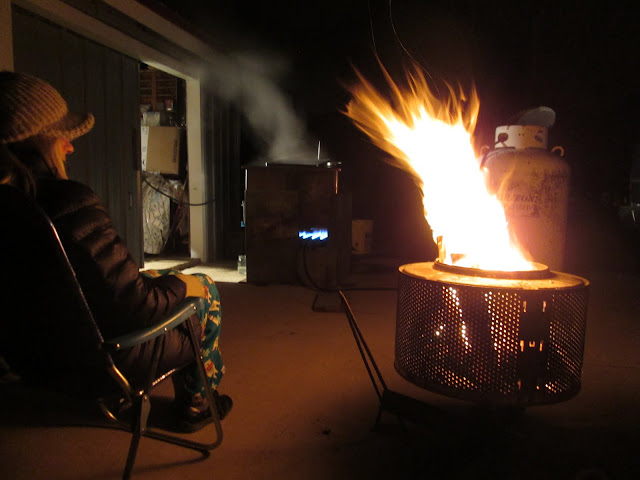 And finally this is what it is all about for me. Boiling sap in the cooker and a roaring fire at night. So far this year have made 7 gallons of syrup and gave samples to all my neighbors that wonder, what the blue bags are for. How many gallons does it take? What do you do to make it? How long does it run? And best of all what does it taste like? And now that you have read the story, why would you do it?