Putting the Drag & Lift devise to the test 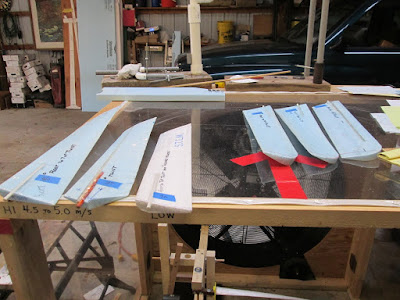 I have cut and prepared airfoil blades with six different degrees of twist from root to tip, ranging from 40 degrees to 23 degrees as shown above. And one airfoil blade with no twist (not shown). 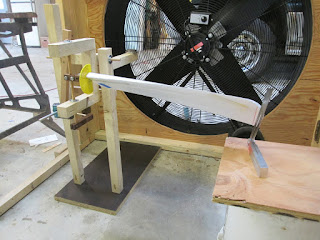 The test. Each blade will be placed in the Drag & Lift devise in the wind tunnel at a wind speed of 4.5 m/s. Each blade with the exception of the one with no twist will be set to a pitch at it's tip of 0, 10, 20 and 30 degrees. A shown in the picture. 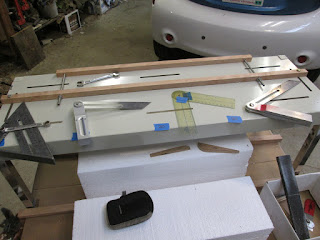 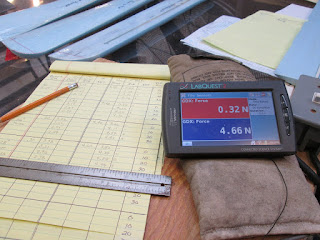 Each blade will be tested at the four different pitches and tested. The net drag and lift forces will be measured and calculated using the Vernier force sensors in the drag & lift devise and recorded. My hope was that the "best" blade would produce data that would be a predictor of how that specific blade design would preform when multiples were made and assembled into a rotor hub and generator. 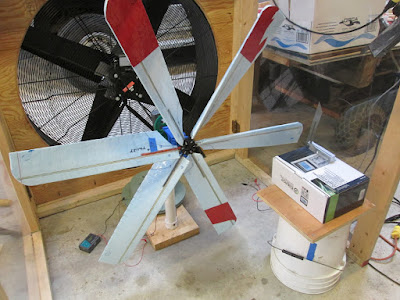 To see if I could find a correlation I tested two previously made sets of airfoil blades. One set with no twist and one set of 6 with a 37 degree twist from root to tip. I would set these blades to 0, 10, 20 and 30 degrees at the tip as shown in the picture. Then record the energy produced in 30 seconds with 30 ohms of load running a KW generator on a 32:1 gear ratio.

Next -
Using the hot wire and pattern process I will now make 6 airfoil blades with no twist but will thin them out toward the tip attempting to reduce drag at the tip and increase output performance above 82.70 Joules.