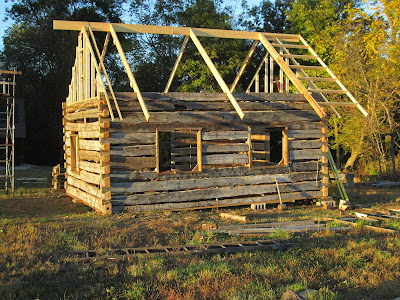 With this blog post phase 1 of the cabin build is complete and ready to be disassembled, moved and re-assembled. Now for the story as to how I got to this point. 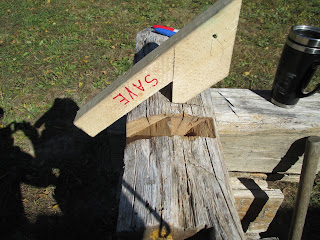 After getting the walls to their finished height it was time to work on the pockets for the roof rafters. To get this just right I felt that a practice cut was in order. Here you can see the shape of the rafter tail end cut and receiving cut that was made into the top log. A nice feature of this cut is how it locks into the top log cut. 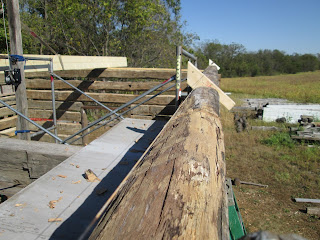 Cutting 18 of these was no small task but the design allows for you to line up the stop cuts in a straight line and equal distance from the ridge on the irregular surface of the log top. 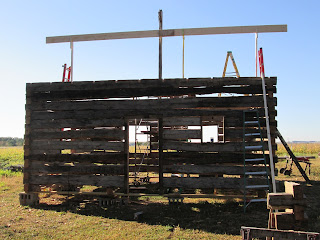 For a number of reasons I decided to raise the ridge with the hoist and block it up for a test fit of the rafter cuts to see if they were correct. And they were so I could proceed to build in the gable ends and frame in the windows. 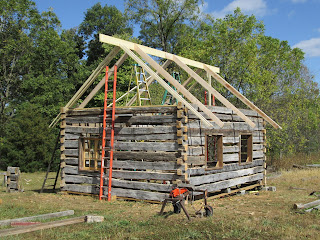 With several rafters in key places the ridge was supported and I could take out the temporary supports so I could build in the gable end studs and frame the windows. 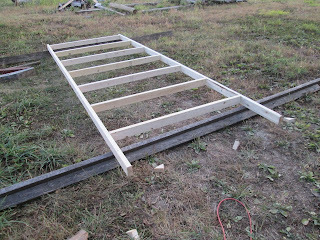 Because of the 36" lookout at the gable end I had to cantilever it. This required the first rafter to be dropped. You can see that I used a 2x4 for the first rafter. This worked out nicely as the main rafters were 2x8's 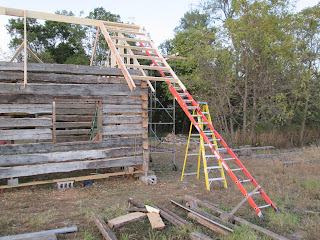 Getting the assembled "ladder" required a ladder to form an incline plane that would allow me to slide it up and screw it into place. When you are working by yourself you have to be a problem solver. Although I got the job done it was a lot of work so now that I know it works I'll just build the other three and not put them up. Just like I will cut all the rafters but not put them all up either. 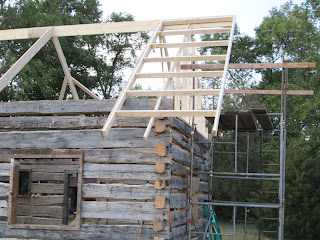 Nice cantilevered gable end for a 36" over hang to protect the lower logs of the cabin. 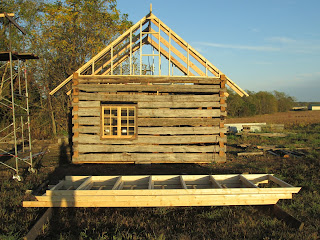 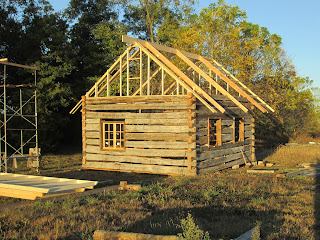 And there we have it. Phase 1 of the cabin build process complete. All the log work done and the roof cut and framed. Now the ball is in the owners court when we will disassemble the cabin and transport it to the building site to be re-assembled. Then I will install the last and cut the stairs to it.

In the mean time I can get on to other projects (Manor fish tank memorial and KidWind Challenge training)  that have been started during the summer.
Posted by Dick at 8:13 PM