Well this went, well! Took Lynn's cabin down in 4 hours and loaded the logs on two trailers on Friday night. A good crew and a Bobcat with a boom mounted on the forks made short work of it. 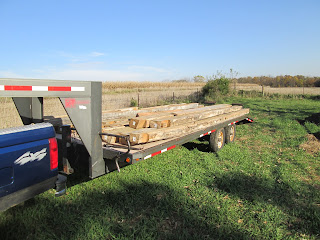 Took a lot longer to plan, cut and assemble the cabin but that's the way it is with most projects. 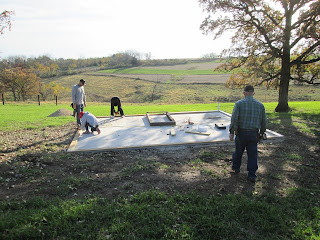 9 am Saturday. Great weather and good day for cabin building. Here is the view that Lynn with have. First step was to lay down sill seal and the treated 2x6's that the logs will sit on. A layer of 1" styrofoam insulation will go down over the concrete and them a layer of 1/2" treated plywood for the sub-floor. 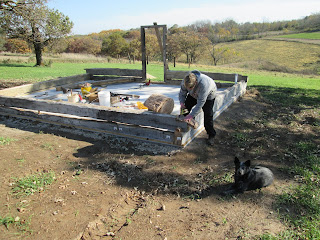 Here is Lynn putting some fiberglass insulation in the area where the half-dovetail surfaces will meet. This will insure a tight seam and eliminate drafts. 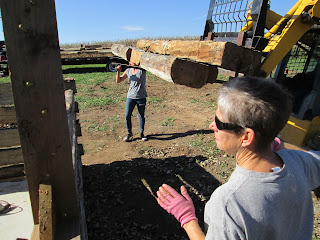 Lynn's dream cabin project is a family affair. Her daughter and sister were in charge of selecting and rigging the logs so husband, Steve could bring them to the cabin wall on the skid steer forks. 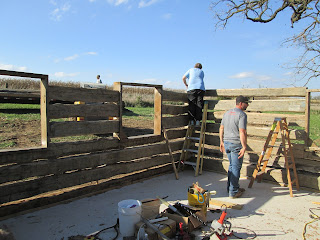 This process continued, round after round. By noon we had the window frames set and the first trailer unloaded. 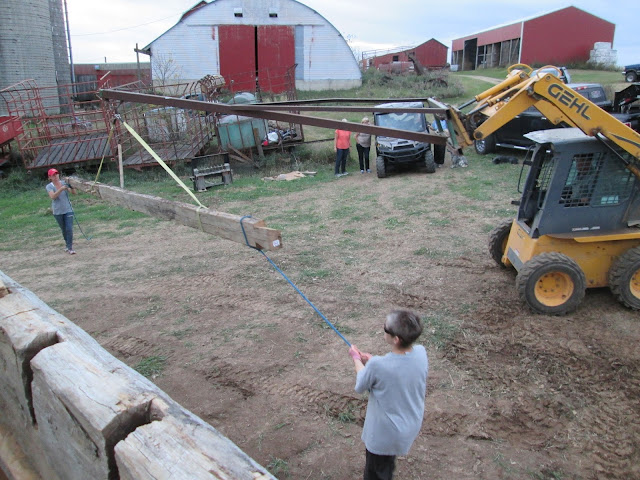 As the height of the walls grew the boom was used to lift the logs up. This was trickier that it looks and required a bit of thinking and planning as each log had a specific inside and outside to it. If you look at the end of the log you can see the "playing card" system I used to ID each log end and it's specific round and corner placement on the cabin. 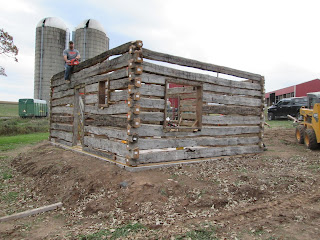 Son-in-law, Lucas and I worked on the walls setting and pinning logs to knit the walls together. You can see the 1 1/2" pin just to the right of the window, between the two top logs. This was done all the way around the cabin on the full length logs. Pounding in the Oak pegs for this was a challenge even when we greased the pegs. We also had to drill several holes in the logs as we went to allow for wires to be ran for electrical wiring that will go in later. 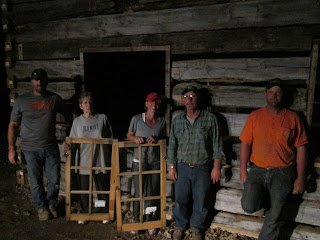 And here's the crew after a good day of hard teamwork completing phase 2 of the cabin project. A hundred  years ago this crew could have held its own with any family building a cabin to live in on the farmstead.

So, next up will be re-framing the roof and getting it ready for sheathing and shingles. Also I will go back to work inside installing the floor of the loft and cutting the stairs to it. Still plenty of serious fun  to be had before the family can move in for the winter and gather around a nice cozy wood stove fire!
Posted by Dick at 5:42 AM