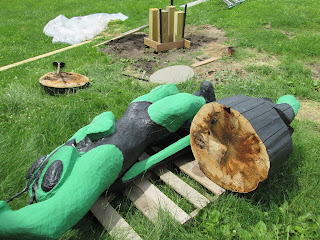 In 1995 while teaching at Scales Mound HS in Scales Mound, IL  a tree in the front of the school died and I decided to carve the school mascot out of it on the stump. The fighting Hornet was a big hit!

Ten years later, 2005 after I had left Scales Mound I got a call from the school janitor saying that the foot and base were rotting and could I repair it? I sawed off the body and rotting foot. Dug in and "planted" a 6 foot log that I had in a new hole. Then mounted the body to it and carved a new leg, foot and books. The results were very good.

Another 10 years passed and this June Jim Glasker, the janitor, called and said the Hornet was in trouble again. This time the base log was rotting and would I look at it? When I showed up the Hornet was down and in two pieces as shown in the top picture.


The solution this time would be a treated 6x6 base, bolt on the carving with angle irons and then fiberglass the entire carving. This should do the trick for many years to come and Jim's retirement! 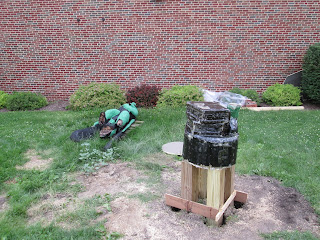 6x6's in place, base on top and body in background. 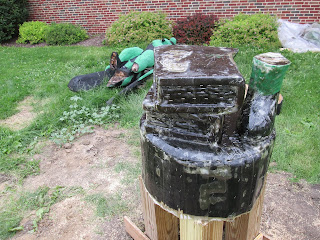 This was the last repair in 2005. The leg and books now covered with fiberglass and water proofed. 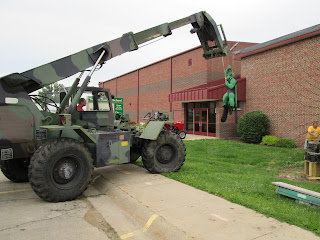 Jim Davis, from the local lumber yard brought in this big boy to lift and place the Hornet body. 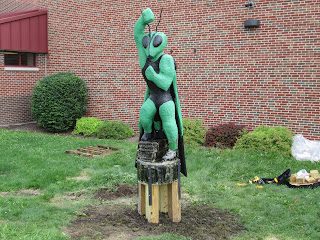 Everything went back together nicely with some longer screws and a metal plate on the leg. 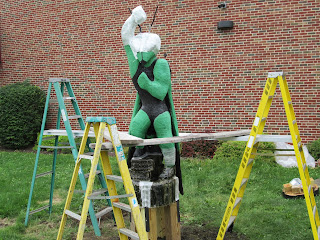 Now the process of fiber glassing the main body and this should do it for another 20 years!