Treehouse packed and ready to roll 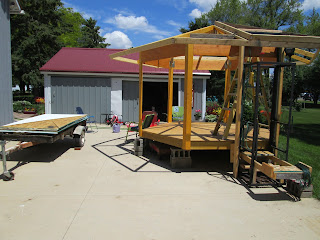 The first step in dissembling the treehouse was to remove the hatch and rubber roof membrane. With this done I could begin to take off the roof sheathing. The upper portion of the treehouse would be stacked on the trailer shown on the left. The floor and floor framing would be put on another trailer. 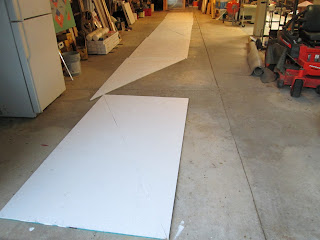 With projects like this it is best and easiest to do any painting or staining before you assemble the project. So here are the roof sheets laid out in the shed where I could roller on a nice coat of white paint for the ceiling. The same treatment was given to the bottom side of the sheets of plywood flooring. 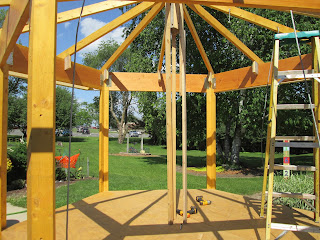 So with the roof sheathing removed it was time to think about the rafters and how they might be kept in some sort of sub-assembly. The solution was to add a second set of block stops to the mid rafters. Then I also installed three leg supports on the center plug and marked their location on the floor. 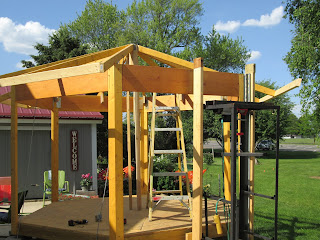 Each set of primary and secondary rafters would be screwed together at the top. Then one end of the fascia would be unscrewed, leaving it attached to the lower ends of the primary/secondary pair. This triangular segment was then removed. 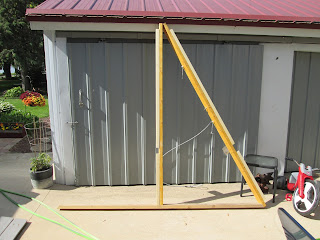 This unit, one of six was easy to remove. Reassembly would be just as easy by hanging the unit on the header between vertical posts and then rolling it in place. 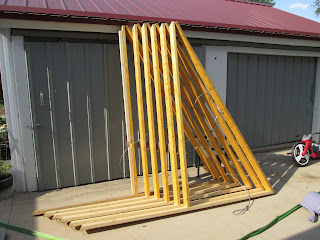 All six of the roof units stacked and ready to load. 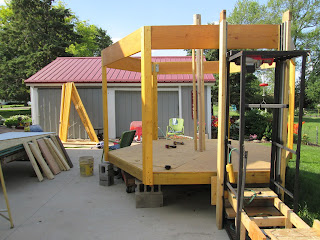 Removing the headers and main posts was pretty straight forward. 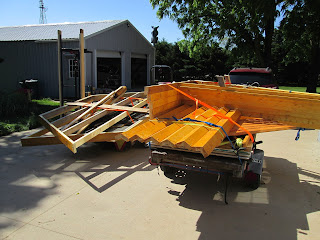 This is a pretty good shot of the loaded trailers. On the right are the main parts. Stacked in the order they will be needed. On the Left is the trailer with the floor system. Here you can see how the following joists and rim joist were split in half. Each half of the floor frame will be raised up as a unit. This should make for easy setting of the floor on the support already in the tree. 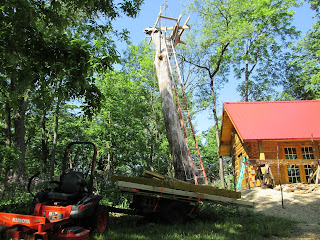 And the arrival of the first phase of the treehouse reassembly. After the floor is in place then I will go to work putting in the elevator. For this phase the rope and pulley system will be used to get parts to the top. The elevator will be used to bring the rest of the parts up and finish the fun!