Phase IV on the Treehouse Project 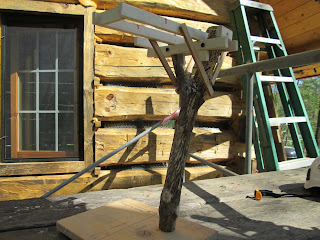 Phase IV involves the building of the supporting structure in the top of the tree that the Treehouse will be attached to.  Pictured is the model of the structure that I am talking about. This will be tricky in the beginning as there will be little to secure safety ropes to and the ropes will also be below the level of work I am doing for the start. 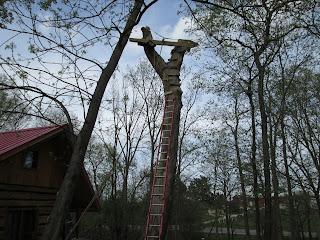 OK, three hours later the first board is up and secured in place. In preparation for this the extension ladder was placed and tied off at the top to the tree. Then the lad slide rope was attached, as high as I could reach, to the limb on the right with the climbing steps. With the climbing harness on this allowed me to safely go up and down the rope to this point. Now the picture doesn't show it but the climbing steps lean a few degrees out from vertical. This causes a bit of anxiety. I then taused two more rope slings through the crotch at the top and secured them. This gave two more points to attach my safety harness leads as I moved up. Being cautious always to be secured by three points as I climbed.
One of the main concerns in this project is how the 1675 pounds of Treehouse dead weight will be distributed. This first support is a 2.5" by 8" piece of rough sawn Oak. The tree trunk was notched to form a flat support for each end and the piece was secured to the tree with four 1/4 by 6" GRK screws. Also as an extra precaution against rotting a piece of rubber menbrane material was placed one the end grain of the notch area on the tree.
So now the safety rope for the lad slide is secured to the top of the highest point on the left limb and I will get to work on the putting up the second main support piece in the same fashion. In the mean time... 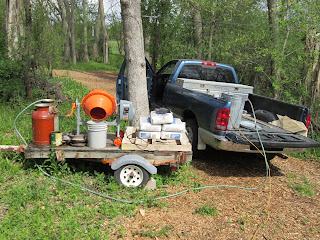 It has been a year now for Cabin #6 and it is time to also get back to work on that. The process of chinking has begun. This required a work station for mixing the mortar that will be used for the job. As there is no running water at the cabin and the mortar will be stored outside this all had to be planned for as the chinking process will take several weeks. 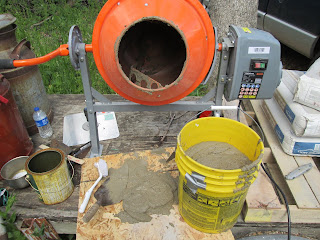 Fired up my trusty new mixer and it is perfect for the job. Making a 5 gallon bucket full of mortar mix per batch is just right. The mortar is a colored pre-mix having all the sand, lime and mortar in it. All I need to do is add water and mix. 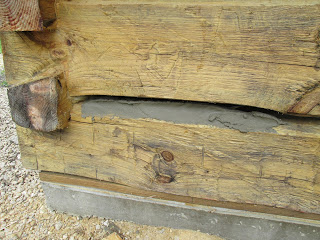 Chinking, first go at it. Will practice on the back and outside of the cabin to get the hang of it. Some of the larger gaps have wire lath in them but either way it is going to take at least two layers of mortar to fill in the gaps in most places. On the outside it is important to run the mortar so that the top edge is under the edge of the top log by about 1/2 inch and then runs out to the very edge of the bottom log. This make the top log a drip edge and prevents the water running down the wall from being able to get behind the mortar joint to rot the logs. This is an important detail in the chinking process! 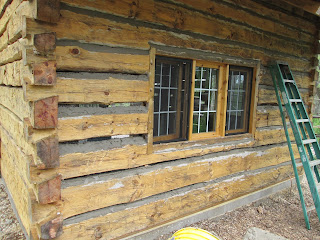 So after a couple of hours and 2.5 bags of mortar the back outside wall has the first layer of mortar in it.