Aug 1987 - Thirteen years had passed. As they say, "time flies when you are having fun"/ I had read several more Mother Earth News articles and tried my hand at several "new" energy producing projects, methane gas, alcohol production, wind generation of electricity but now the energy crises was over! Life was good and also took over. But then my neighbor, Emmett came over to have some shoes repaired and said he was getting rid of his daughters 1980 Dodge Omni. I traded him a pair of half soles and new heels for it on the spot! Got the local salvage guy to haul away the 1960 "Beamer" (but kept the BMW emblem from the hood) thinking I might want to "class-up" the Omni when I converted it, "in the future". 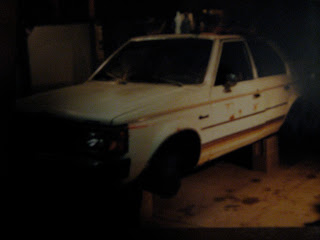 June 1992 - The future was here! On one of my expeditions to the local "gold Mine" as I called it Bob's Salvage yard I spied an electric forklift. As my eyes bulged out of my head I made a beeline to it. All there, the motor and controls. I mean these were "real controls" no "chopper" needed. This had a massive plate of 5 relays, it was all there. In my mind this was going to be a "turn key" conversion! It was powered by a 36 vdc five horsepower motor. It was massive, 12 inches in diameter and over 16 inches long, a real beast! The controls were all nicely mounted on  a backing plate and weighted almost as much as the motor. Surely this would work and soon I would be driving an EV around town.

July 1992 - Being a high school teacher I had the summer off and it would not be wasted. My mechanic friend Jerry, suggested that I speed things along and do another "proof of concept" by just removing the head, pistons etc. of the Omni engine first. Then just bolt the forklift motor to the head and run a belt to a pulley on the crankshaft, walla! This was a great idea and he also knew of three 12 volt truck batteries, like new that had been returned to the NAPA store for some reason and I could have them. Bingo! I was back on track and had a mission to complete. 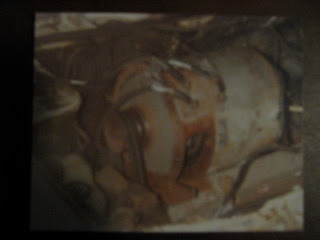 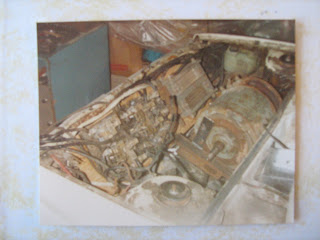 To the left of the motor you can see the bank of relays and resistance screens for controlling the forklift motor. It fit into the engine compartment amazingly well. 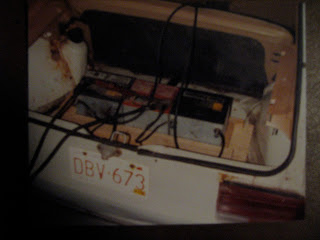 Three 12 volt batteries wired in series for 36 volts riding in the trunk of the Omni. Looks like we are ready to go for a ride. 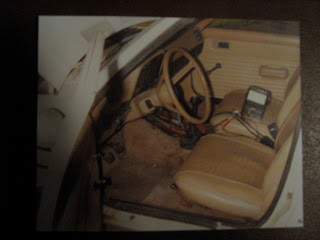 Aug 1, 1992 - With my trusty Simpson multi-meter in the front seat and a trunk of fully charged batteries I pushed down on the forklift control pedal on the floor and rolled out of my pole shed. My heart raced as I shifted into 1st gear and headed off to the high school parking lot. Around and around I  went. Five, ten, fifteen laps (3 laps was a mile) and the voltage was still pretty good. Even though the max speed on a level surface was 15 - 18 mph, not bad, but not practical either. However, I like Kramer, wondered, how many laps could I go on one charge? The count was 32 and then I headed for home (one block away) cruised into the pole shed and parked it.

I would need to do some more research...