Bring out the EASY BUTTON...

More on the EASY BUTTON later in this post.

With all the roof changes in the works I had some time on my hands and thought that some practice with reassembling the lattice truss parts might be in order. Much to my surprise (relief) this went well and I look forward to sharing what I have learned about the reassembly process with the students. 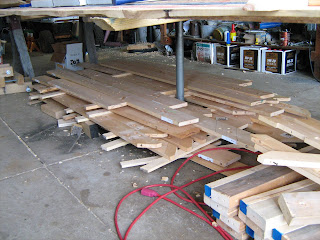 BEFORE - The carefully numbered and stacked 6 layers that will make up one lattice truss of the 3/8 scale model. 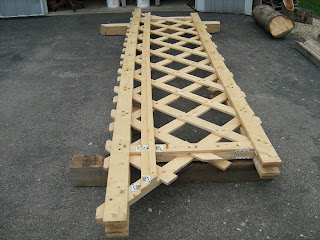 Bring out the EASY BUTTON
The EAST BUTTON and "That was EASY", was the tag line from the Staples office supply company promotion that ran a few years ago. I loved the EASY BUTTON and kept one handy in the shop at school for my students to use when they encountered problems with their projects. One push of that baby and all was well... EASY as they say.

I am a bit "old school". My saying would be, "nothing" is EASY.  Doing "nothing" will be EASY! I found out that getting from BEFORE to AFTER required careful thought, planning and deliberate action. I took a dozen pictures and wrote up the specific step by step details I took along the way. This takes up much time and space so I will defer to Milton Graton's straight to the point description of the process from his book, THE LAST OF THE COVERED BRIDGE BUILDERS, page 90.

Reassembly of Trusses -
The bedding timbers are leveled and laid out and the same clamping process is followed.
To insure perfect alignment, drift pins made of sharpened trunnels are used and driven into the holes which have been well lubricated with heavy cup grease.
First, two members are lined up with short 4" pins. Next, the first layer of lattice is pinned in place with a drift pin 2" longer than the first, and the second layer of lattice is secured with a still longer pin. This takes place in groups located near end joints.
When the next chord member, which makes the fifth layer, is laid out, a longer and a blunter pin is used which forces the first short pin out and replaces it through the five "layers".  As the final chord
members are laid out, the second short pin is replaced with a trunnel if alignment appears correct. From then on, trunnels are used in well greased holes to punch out and replace other drift pins.
Before full length trunnels can be driven, a block supported by a jack must be placed near the driving area, to back up the timbers and prevent them from bouncing.

There you have it, as they say at Staples, "That was EASY". It is a wonder, to many high school students today, how Milton and his sons managed without an EASY Button from Staples!

Puzzler - How can two people raise each 2,800 pound truss assembly by hand?