"We'll have this together by Wednesday..."

Bruce and Alex wanted to know when I would be bringing the rest of the .60 scale bridge parts to South Wayne because they would have their truss re-assembled by Wednesday.  As they left my shop in Darlington and headed back to South Wayne with a truck load of truss parts I though that was a pretty bold statement. I had faith in them that they would succeed but by Wednesday?
Well, have a look. Here is the truss in the South Wayne Ag shop re-assembled as predicted by Bruce and Alex. 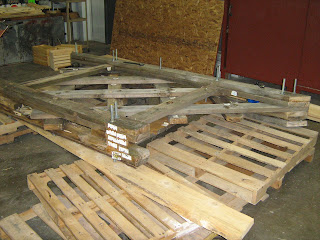 And guess what? This picture was taken on Tuesday! I went down to Black Hawk to see how they were doing. I dropped off the rest of the .60% model pieces and can't wait to see how they do. I'll stay away for a few days, don't want to get in their way or slow down these guys. Got to love it.

Puzzler - In what order will the next pieces of the .60 % scale model be re-assembled?